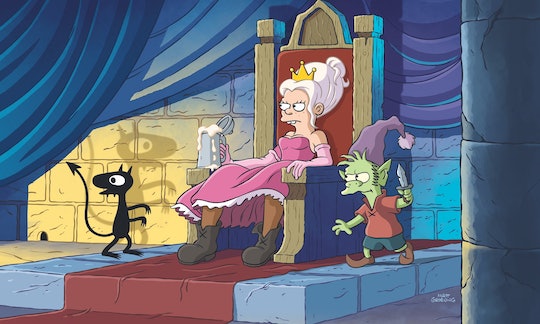 It is always fun to hear familiar voices on animated features, especially when they come from your favorite celebrities. Netflix’s new animated series, Disenchantment, comes from The Simpsons creator Matt Groening and features a princess character who doesn't exactly fit the "princess" mold. Her voice sounds all too familiar, so exactly who voices Bean on Disenchantment? It’s none other than Broad City’s Abbi Jacobson, and she fits the role perfectly.

Jacobs plays Princess “Bean” Tiabeanie, whose father is the king of Dreamland and would like to see her get married to a nice prince, naturally. However, Bean is not your typical cartoon Princess. She’s got a bit of an alcohol problem and decides it’s time to take her destiny in her own hands by setting off on an adventure with her two sidekicks, Elfo and Luci.

In an interview with Entertainment Weekly, Jacobson described what inspired her about the character. “I really like the fact that she’s an anti-stereotypical princess,” said Jacobson. “It’s so not what a usual princess story is— But it’s a really strong female character, which I’m obviously excited to play.” She also talked about her love for Groening’s work and how she jumped at the chance to land a role on the series. “When I saw it was Matt, I was like, ‘Of course I’m going to audition, and then I’m not going to get it, and then I’ll forget about it, which is what happens usually,” Jacobsen told the outlet. “And then I couldn’t believe that I got it. It’s been a constant pinching-myself situation to get to work with him and the whole team.”

Groening and Disenchantment’s executive producer Josh Weinstein talked about the character of Princess Bean at the 2018 San Diego Comic Con. According to Showbiz Junkie, the two discussed how Jacobson put a bit of herself into the role. “She’s the most interesting character that we came up with for a long time because she had so many flaws and she’s still lovable,” said Groening. “And Abbi took what we considered very feminist lines and made us realize how mild we were. She kicked it to another level.”

Disenchantment isn’t Jacobson’s first animated project for Netflix. In 2016, the actress and comedian voiced the role of Emily on Netflix’s animated comedy series, BoJack Horseman. Her most notable role, of course, has been Abbi on Comedy Central’s Broad City, a series that she created with co-star Illana Glazer. But the actress and comedian has also been featured in a number of television and film projects over the years, including Portlandia, Inside Amy Schumer, and in the 2016 film, Neighbors 2: Sorority Rising.

In her interview with EW, Jacobson admitted that she enjoyed taking a break from Broad City, where she works as actor, writer, and executive producer. “It’s such a breath of fresh air for me, I get to come in, record, pitch joke ideas during recording and improvise if I want. Then I get to leave and trust that they make a dope show," said Jacobson. “Whereas on Broad City, Ilana [Glazer] and I are very much micro-managers So, honestly, it’s nice to get to leave and be like, ‘Wow, this turned out great.'”

According to press release from Netflix, the streamer has ordered a total of 20 episodes of Disenchantment to be aired in ten episode increments. The first ten episodes premiere on Netflix on August 17, but when the next ten episodes will be released has not yet been announced. The series also stars Father of the Year’s Nat Faxon as Elfo, an elf that is trying to escape his unrelentlessly joyful life because he can’t follow its “Jolly Code.” Eric Andre fills the role as her sidekick, Luci, who turns out to be her cynical “personal demon.”

Fans of Broad City should enjoy seeing (or hearing) Jacobson as an unconventional princess. It’s about time cartoon princesses turn their damsel in distress act into something that real-life women can relate to.