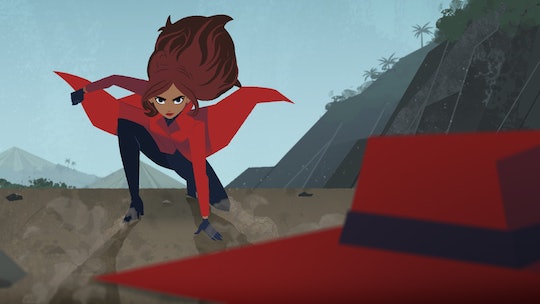 Here's Who Voices 'Carmen Sandiego' In The Netflix Reboot

If you're a millennial of a certain age, then the Carmen Sandiego theme song gets stuck in your head at the mere mention of the words "Carmen Sandiego theme song." Netflix is banking on that nostalgia factor with its reboot of the 1985 computer game-turned-PBS game show for gumshoes — er — kids. So viewers tuning into the new animated series are probably wondering who voices Carmen in Carmen Sandiego, because it's a pretty iconic scarlet hat to fill. Luckily, Netflix followed through on giving audiences real Latina representation for one of the only Latina characters in early gaming. Jane the Virgin's Gina Rodriguez takes over the voice role, and she's super excited to be playing such a beloved figure.

"Carmen gets to travel to so many different places all over the world, and you see her empathy and desire to learn other people’s languages and cultures and religions, and she teaches that," Rodriguez said in an interview with NBC News. "The show fuses two things I love the most, which is art and education, and when I see that cute little girl with her pretty brown skin, it makes me melt. I almost want to cry when I think about it."

The animated series takes us through Carmen's origin story as a star student at the V.I.L.E. Training Academy for Thieves. Ultimately, she realizes that being a professional thief of the highest order is not a victimless crime, not by a long shot, especially when her classmates resort to hurting people who get in their way. So she strikes out on her own, embarking on a mission to steal everything V.I.L.E. might want before they steal it. She's — wait for it — a thief who only steals from other thieves.

This is the first time Carmen actually stars as a character in her own scripted TV series, since the 1991 game show was mostly an elaborate geography bee for middle schoolers to play along with. But the reboot features a big homage to the original, anyway. Rita Moreno — who voiced Carmen on Where In The World Is Carmen Sandiego? and earned three Daytime Emmy nominations for her work on the show — returns for the Netflix reboot to voice V.I.L.E.'s bookkeeper Cookie Booker.

Amazingly, this isn't the only Carmen Sandiego gig Rodriguez has lined up. She's also slated to star in a live-action Carmen Sandiego film for Netflix, according to Entertainment Weekly. Rodriguez dropped an homage to her character on Instagram to whet fans' appetites, but Netflix was quick to clarify that it wasn't her actual costume, just a nod to the character and her involvement with the project.

Rodriguez is on board to help market a forthcoming book series based on the new Carmen, as well, and Netflix has set up a project tracking Carmen's influence over the past three-plus decades at TheCarmenEffect.com.

Said Rodriguez to Entertainment Weekly, "I feel blessed that we get to bring Carmen to the next generation."