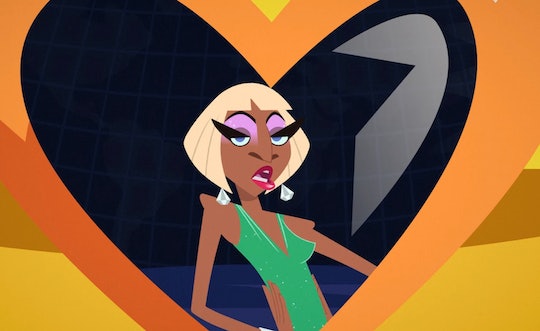 Champagne From 'Super Drags' Is Voiced By This Well-Known Queen

Netflix has taken adult animated series to a whole other world with its latest offering, Super Drags, which is sort of Charlie's Angels meetsThe Powerpuff Girls, but with drag queens. The English-dubbed Brazilian comedy, which sadly only consists of five 25-minute episodes, is easily marathon-able and wildly fierce. It also features some familiar voice talents, including that of the group's Bosley, named Champagne. So who voices Champagne in Super Drags? That would be Trixie Mattel.

If that name sounds familiar, then chances are you're a fan of RuPaul's Drag Race. Mattel famously competed on Season 7 of the popular reality series. She was eliminated in the fourth episode, only to return a few episodes later. Mattel ultimately placed sixth in the competition.

This launched quite a career for the queen. Along with fellow Season 7 contestant Katya Zamolodchikova, Mattel starred in the World of Wonder (WOW) YouTube talk show UNHhhh, beginning in 2016. The web series was so well-received that the queens spun it off into a Viceland series in 2017, titled The Trixie & Katya Show. This lasted for just one season, with Zamolodchikova turning over hosting duties to Bob the Drag Queen for the final few episodes. Both original queens are now back on UNHhhh on YouTube now.

Mattel returned to RuPaul's Drag Race for Season 3 of All Stars. She wasn't the expected winner of the competition, but she managed to take home the crown regardless after the eliminated contestants rallied against frontrunner Shangela. RuPaul himself recently spoke about Mattel's win. He said, "I love Trixie. She's a real superstar, but I really didn't count on the other girls who came back being so vindictive."

Of course, RuPaul isn't the only one with an opinion about the queen's win. BenDeLaCreme, who dropped out of the competition, disagreed with the creator, saying "anyone who has seen Trixie live knows that she is a brilliant comedian. Anyone who is paying any attention at all can see how she has grown her comedy and her music career and her television presence is unsurpassed really." It's not exactly surprising that someone else recognizes her talent — and clearly, Mattel is on fire right now.

In addition to voicing Champagne for Super Drags, Mattel has been very busy performing over the last year. She participated in not one but two comedy tours: Haters Roast: The Shady Tour with fellow drag queens from February through April 2018, and then her own Now With Moving Parts tour that ran through July. And Mattel hits the road again early next year with an Australia-New Zealand-UK Skinny Legend tour.

But what really sets Mattel apart is her music. In fact, she's been a country singer since before she adopted the Trixie Mattel persona, releasing an EP Greener as Brian Firkus. These days, she sticks to her drag queen name, releasing a pair of folk albums Two Birds and One Stone, which will be re-released as a compilation this month.

And if that's not enough, Mattel will be returning to her RuPaul's Drag Race roots once again. RuPaul's Drag Race Holi-slay Spectacular, which airs in December, will see Mattel compete against seven other returning competitors, including Shangela, for the Drag Race Christmas Queen crown. Hopefully Super Drags will be enough Mattel to hold you over until then.