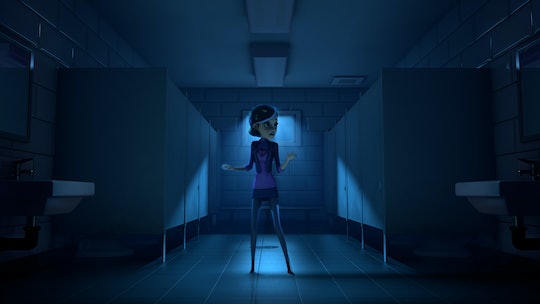 Who Is The Voice Behind Claire On 'Trollhunters'?

On Netflix's animated series Trollhunters, Claire Nuñez is friend and love interest to lead character Jim Lake Jr. Their bond grows over the course of the series until Claire is an integral part of the team. Audiences know the character very well by now, but the actress who brings her to life might not be quite as familiar. That could leave you wondering: who voices Claire on Trollhunters?

Lexi Medrano is the one who imbues all of Claire's lines with the personality that has endeared her to viewers. She might be best known for Trollhunters but she also has a few guest appearances in live action shows on her resumé, too. Medrano has popped up in Agent X, Sullivan & Son, and Good Luck Charlie, as well as an episode of Modern Family. Her first two roles were on the TV shows Ingles Ya! and Lost Tapes. Claire is her biggest role to date, though.

Medrano's career may be just starting out, but if the success of Trollhunters is anything to go by, then there may be even more opportunities in her future. As of right now, however, it seems like voicing Claire is what Medrano is devoting all of her professional time to.

And Medrano definitely seems appreciative of her fanbase. Her Twitter account is full of retweets from viewers who were overwhelmed by how much they loved Season 3, and she made sure to express her thanks for the outpouring of support. In one tweet, Medrano wrote:

All of the reviews, tweets, and messages about @trollhunters have me feeling so grateful to be a part of this show with an amazing team and even more incredile [sic] fans!! I appreciate the love, we all do. <3

Her Instagram account gives her audience more of a glimpse into her life outside of the recording booth. She features plenty of fashion and stunning locales, from gorgeous beaches to cute coffee shops. She's also a dog mom to a ridiculously adorable puppy named Ace, which means her account has basically everything you could ever need from Instagram. It doesn't feel like an exaggeration to say that Medrano is living her best life.

Claire has been through more than a few changes over the three seasons of Trollhunters, and Medrano has been there to usher her through all of them. She may have started out as Jim's unrequited crush, but her storyline grew when her little brother was switched out for a troll. Since then, she has mastered the use of the Shadow Staff, which allowed her to open portals to other worlds.

Those worried that Season 3 would be the last they saw of Claire don't have to worry. When promoting the show on Instagram, Medrano captioned a screenshot with the following (while including a sweet shoutout to co-star Anton Yelchin, who passed away suddenly in 2016):

The next chapter of @trollhunters is now on @netflix and let me tell you, part three is AWESOMESAUCE!! Four years of the most amazing job, the greatest team, and lots of hard work. Buuuut, don’t you guys worry, the story isn’t over just yet ;-) #foranton [sic]

Medrano could be referencing the fact that Trollhunters is just the first part of three; two spin-off series called 3 Below and Wizards will be following in its footsteps, all collected under the title Tales of Arcadia and sharing the same universe. While Claire, Jim, and company won't be the lead characters in those shows, there is the possibility that characters will be crossing over from one to the next. They are all set in the same town, after all.

If Medrano's comment are anything to go off of, Trollhunters is as much fun to make as it is to watch — and it's a lot of fun to watch.