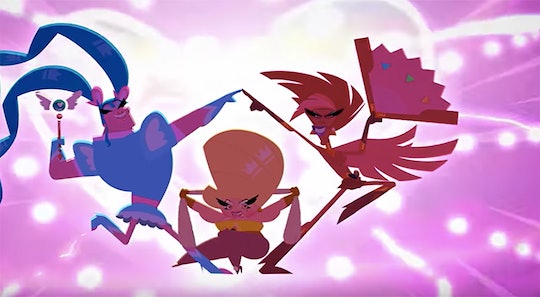 If you're into the concept of crime-fighting drag queens, there's a good chance this new series on Netflix is right up your alley. And to prep yourself for this fun show, you'll probably want to familiarize yourself with who voices Donizete in Super Drags.

Super Drags premiered on Friday, Nov. 9, just a few months after it was first announced in June aka Pride Month. The series follows three gay co-workers (Ralph, Patrick, Donizete) who "work in a department store with annoying customers and a picky boss," according to Pride. But "at night, they release their inner divas to become Lemon Chiffon, Cran's Sapphire and Crimson Scarlet: three incredibly fabulous Super Drags who have been recruited to gather the LGBT community and spread glitter in the world."

Sounds intriguing, right? There can never be enough LGBTQ+ cartoons, in my opinion.

Arguably the best part about the show? It's the first Brazilian animation to premiere on Netflix.

We are thrilled that our first Brazilian animation will present our audiences with the daring, scandalous and fabulous world of Super Drags! Netflix is ​​fortunate to invest in great animation talent from Brazil, bringing the vibrant trait of Combo and the acidic mood of our producers to the beautiful and the canvases from every corner.

But if you're worried that you don't speak Portuguese, don't sweat it. There's a dubbed English version of the show, and many impressive television personalities signed on to help with the project. One of those stars is Shangela (D. J. Pierce), RuPaul Drag Race's only three-time contestant. Shangela voices Donizete and his alter ego, Scarlet.

Shangela couldn't be more thrilled about his new role, writing on Instagram:

FIRST LOOK!!! Here’s my character Scarlet. And baby, trust and believe ... Miss Scarlet is NOT here for the foolishness!!! 😂😂😂 It’s going DOWN in Crimeland! I think this photo was taken right after the villain said she had a SugarDaddy! 😂 #SuperDrags#Nov9#Netflix.

Outside of RuPaul's Drag Race and Super Drags, Shangela appeared in A Star Is Born as a drag bar owner and emcee. As for how Shangela landed the role? It all came together in an unexpected way. He told them:

Well, actually, I missed the first audition. They were calling for one of the drag roles in the film, which was a Marilyn Monroe impersonator. I was like… well, honey, no matter how much I stay out the sun, I ain’t ever going to look exactly like Marilyn Monroe. So I just thought this job probably wasn’t for me. No tea. But then, a couple weeks later, I got an email from Lady Gaga’s camp. They were like, 'LG heard you didn’t come in for the audition. She wanted to know why and would really like you to come in for this role.' You know, if Lady Gaga asks, you respond!

Once Lady Gaga personally intervened, Shangela booked it to the audition, revealing:

So I immediately found the nearest blonde wig and white dress, and I went in there with my little beauty mark. Afterwards, they said, 'The casting [directors] really liked you and they figured that, better than this drag lip sync role, they want to give you a bigger role that has dialogue, where the character is more developed.' And that’s how I got cast as the drag bar emcee.

Given Shangela's success with Super Drags and A Star Is Born, there's no doubt he's destined for a long and exciting career. Congrats all around.