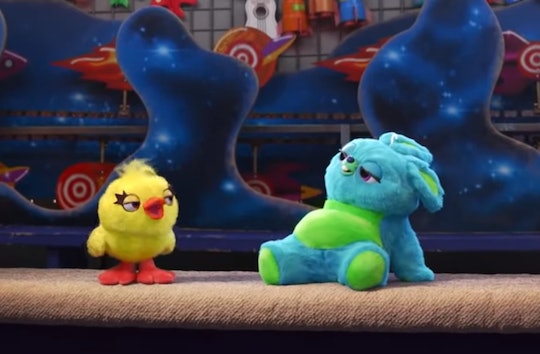 One of the year’s most anticipated films is set to release in theaters this Friday, and although it’s hard to believe the creators are still coming up with creative and entertaining characters, teaser trailers have proven that, well, they surely are. Two characters in particular stand out in the bunch, so who are the voices behind Ducky and Bunny in Toy Story 4? Buckle up, because a hilarious and iconic duo has reunited for the roles.

Ducky and Bunny debuted in November 2018 in a tongue-in-cheek teaser that saw them discussing the release of the upcoming film. The voices may have been a little difficult to place right away, but that’s only because they were so unexpected. The split-second comedic timing that make the carnival toys so funny is the result of years of working together for Jordan Peele and Keegan Michael-Key. According to Entertainment Weekly, Peele plays the blue and green Bunny while Key is his sidekick Ducky.

Director Josh Cooley told The Wrap that the actors behind Ducky and Bunny "are two of the most brilliant minds I’ve ever seen." He added in the same interview, "Of course, they are effortlessly funny, which would be enough. But they are incredible actors that understand story. Their improvs weren’t just for comedy sake, they were story motivated which elevated Ducky and Bunny and the film to a level I never could have expected."

Key and Peele comprised the comedy group that entertained audiences for five seasons on their sketch comedy show of the same name. They are infamous for bits including an anger translator for President Barack Obama and an inner-city substitute teacher who just can’t get the names of white kids right.

In fact, the pair are so funny that their chemistry couldn’t even be confined to the film — a Ducky and Bunny Twitter account was started in advance of the movie’s trailer release during the Super Bowl. The story goes that the characters found a cell phone that somebody dropped at the carnival and have been tweeting since.

Ducky and Bunny are joined as new cast mates by Forky, voiced by Tony Hale and Gabby Gabby, voiced by Christina Hendricks, as the New York Daily News reported. Forky is a toy made out of a spork who struggles with his newfound identity, and Gabby Gabby is a doll that has been living in a carriage in an antique shop. The biggest casting news may have been that of Keanu Reeves, however, who voices a stunt driver toy named Duke Caboom.

While there’s a lot of fun to be had in the new trailers and the movie is sure to be no less entertaining, there’s also a sweet, emotional element to it that could surprise some viewers. Tim Allen, who of course voices Buzz Lightyear, was on The Tonight Show with Jimmy Fallon and described reading the ending for the first time, and said: “I read it, and I had to turn around from looking at it in studio…It’s so emotional. It’s a ‘Scarlet, I don’t give a damn’ moment.”

The world will finally find out what got him so emotional soon! Look for Ducky, Bunny, Forky and the whole OG crew in Toy Story 4 in theaters on Friday, June 21.