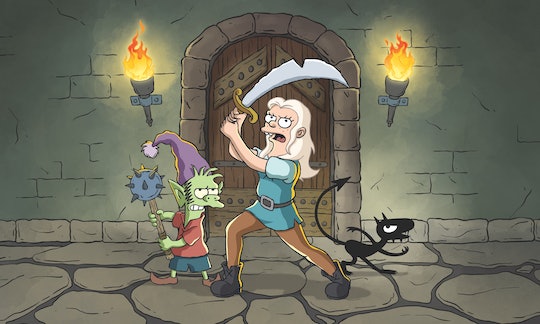 Matt Groening, creator of The Simpsons and Futurama, is bringing his new animated series Disenchantment to Netflix on August 17. The medieval comedy series features a cast of notable comedic actors including Broad City’s Abbi Jacobson as the rebellious Princess Bean, Eric Andre as her “personal demon” Luci, along with the hilarious Nat Faxon who voices Elfo on Disenchantment.

This role is Faxon’s third for Netflix in 2018. Earlier this year he starred opposite David Spade in the Netflix original movie Father of the Year, along with voicing the character of Mr.Krupp/Captain Underpants in the streamer’s animated series The Epic Tales of Captain Underpants. Outside of his recent work with Netflix, the actor has been voicing animated characters for years, and has been featured on shows like Family Guy, The Cleveland Show and American Dad!.

Aside from his projects as an actor, Faxon’s most acclaimed role was as screenwriter for the George Clooney film, The Descendants. In 2012, the screenplay earned him, along with co-writers Alexander Payne and Jim Rash, an Academy Award for Best Adapted Screenplay. Faxon also wrote the screenplay for the critically-acclaimed comedy The Way, Way Back, starring Maya Rudolph and Sam Rockwell.

In Disenchantment, Faxon plays the role of Elfo, an elf that is eager to leave his overly joyful hometown, because he can’t handle its “Jolly Code.” In a Netflix press release, his character is described as “an 18-year-old elf from the sheltered, hidden world of Elfwood. Even though he's upbeat, optimistic, and extremely knowledgeable of candy, he's always felt a little different from the other elves, and he leaves Elfwood in search of the big life he's been missing."

After leaving Elfwood. Elfo meets Princess Bean and her personal demon, Luci. The princess has just refused her father’s wishes by refusing to marry a prince that would further his political career. Princess Bean is a brawling, burping, beer-drinking princess, and Elfo and Luci follow her on her journey through Dreamland. “Viewers will be whisked away to the crumbling medieval kingdom of Dreamland, where they will follow the misadventures of hard-drinking young princess Bean, her feisty elf companion Elfo, and her personal demon Luci,” the official description reads. “Along the way, the oddball trio will encounter ogres, sprites, harpies, imps, trolls, walruses, and lots of human fools.“

True to Groening’s style, Disenchantment finds satirizes today's occasionally absurd cultural norms. For starters, Princess Bean’s character is far from a conventional cartoon princess, and her tendencies are more Sasha Fierce than damsel in distress. While her demon friend Luci, conspires evil plots and tends to the Princess’ darker inclinations, Elfo — who reminds me of the Frozen character Olaf — seems to be her voice of hope and reason, even in the most dire of situations. In the trailer for the series, the Princess asks him, “What is this feeling I don’t want to drink away,” to which Elfo profoundly answers, “Hope.” In another hilarious scene, a woman is seen in the river yelling “I’m drowning!” to which Elfo innocently replies, “I’m Elfo.”

The first 10 episodes of the series premiere on Netflix on August 17, but there are another 10 episodes in the works. According to a 2017 press release, the streamer has ordered a total of 20 episodes, but there is no official word on when the second installment will drop. In the meantime, you can get acquainted with Groening’s satirical world on Disenchantment, along with it’s charming, yet raw characters. It is a socially conscious, feminist princess story for the modern times, but with Groening at the helm, you can count on some serious laughs as well.