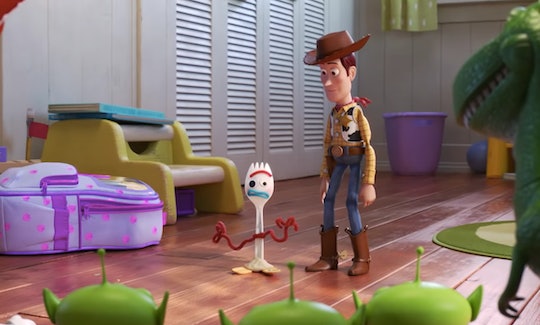 There are only two days until we officially bid adieu to one of the most memorable cultural staples of our 90s childhoods — the fourth, and what's said to be the final, addition to the beloved Disney-Pixar franchise. Toy Story 4 officially opens in theaters on June 21 and our favorite toys are going on an entirely new adventure to save their newest friend, Forky. And while you're watching the film, you might be wondering who voices Forky in Toy Story 4, because beyond sounding very recognizable, the film's new character actually has a pretty meaningful message to share.

For those who aren't yet familiar with what the movie is going to be about (and don't worry, this doesn't spoil anything) Buzz and Woody are left to confront a crisis when their kid Bonnie's arts-and-crafts toy Forky — a spork made with some pipe cleaner and googly eyes, who's voiced by the one and only Tony Hale — can't reconcile the fact that he's not a "real" toy. During a family vacation, Forky runs away, and the toys team up to not only find him, but they also run into some trouble as well.

It's at this point that the group meets another new character named Gabby Gabby, who promises that she can take them to the since-missing Bo Peep in exchange for Woody's voice box (it's got some Little Mermaid vibes going on for sure) and the rest, well, you'll have to wait until Friday to see.

Of his character, Hale told Forbes that it's "surreal" to have such a role in an iconic film, and that Forky has a really important message to share. "It's so exciting. Little kids holding Forkys. I mean, it's very, incredibly surreal," the Arrested Development alum told Forbes, adding:

But the thing that I think I get most excited about, and this is genuine, is Forky — not in a sad way, but he really was just like, "I'm trash. I'm made for the trash. This is my sole purpose." And Woody comes in and says, "You're more than that. You're worthy to be loved. You're worthy to have a purpose." And I just think, "What a fantastic character to be associated with, as a part of that message." Because everybody has a purpose. Everybody has worth. I love that.

Hale, of course, is best known for his roles on Veep and Arrested Development, according to his IMDb page, so animation is a new medium for him. In fact, Hale previously told Variety that he can relate to his character in Toy Story 4 in the sense that they are both overwhelmed in life.

"Pixar described him saying he’s got a neurotic energy, and I was like, 'Check. I’m in,'" Hale toldVariety. "I very much resonated with Forky because he’s so overwhelmed by everything. I feel like I’m just as overwhelmed being part of this film franchise. He comes in and is like, 'Why am I here?' And I’m asking the same questions. How did I get here? Him and I are one in the same."

Ultimately, it's destined to be a funny, feel-good movie that will make viewers think long and hard about the nature of life, love, friendship, meaning and purpose... and probably leave the theaters with tears streaming down our eyes. Truly, if that's the power an animated film can have, then we're in for a treat come this weekend.