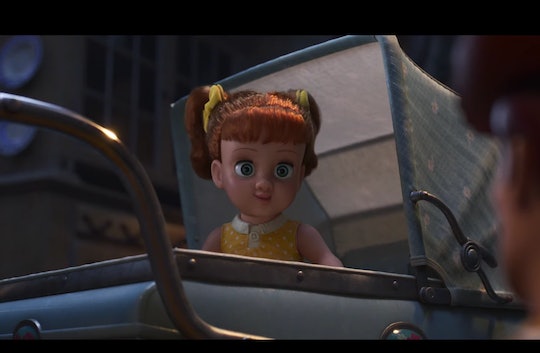 The end of an era is nigh. Toy Story 4 debuts in theaters nationwide on June 21, critics have already shared their initial reviews and hot takes from the pre-screening sessions, and so far, it sounds like it's going to be a bittersweet and nostalgic look at the last chapter in our favorite toys' lives. Of course, there have been changes and additions to the cast, and some may be wondering: Who voices Gabby Gabby in Toy Story 4? As it turns out, it's an actress you already know and love.

Mad Men alumnae Christina Hendricks was cast to play Gabby Gabby in the film, according to CinemaBlend. Gabby is one of the toys at the consignment shop that Woody and Forky find themselves in while looking for Bo Peep. Though the teaser featuring Gabby is brief, and doesn't show the full extent of her role in Woody and Forky's journey, what we do know for sure is that she's a babydoll that is somewhat stationary in her old-fashioned stroller, she has bright red hair, just like the actress that plays her, and... she's secretly the villain of the story, Woody and Forky just don't know that yet.

Of course, the charm of Gabby Gabby is that she seems so endearing and sweet on the surface, but there are clues that she's trouble from the onset, as SlashFilm explained. First, she exists solely in a dark and dusty antiques shop, she has a ventriloquist dummy doing her bidding, and she seems a bit too eager to help Woody and Forky along their way.

Of her character, Hendricks says she was honored to get to take part in this installment of the story. "I think I didn't fully know the significance of my character because I never had the full script and I was working in kind of a bubble. I didn't get to work with the other actors," she told USA Today. "I think it's important to have a character like this Gabby Gabby because children are watching it. There are so many movies where there are bad guys and good guys, and she starts out (as) what we think (of) as a bad guy, and we realize that everyone has a story, and there's a reason why we become who we are, and you have to hear that story to understand them."

However, despite the missteps and trouble that characters like Gabby might be creating, the truth is that this film is about wrapping up a decades-long, beloved series.

In a review of the film, Vox movie critic Alex Abad-Santos described it as follows: "Toy Story 4 is a celebration of love more than anything — the magic in it to transform us and the terminal pain that arises when that love goes unreturned. If love sustains us, as Woody explains to Forky in so many ways, then we do everything we can to return and preserve it."

And with new additions to the crew like Gabby Gabby, the beloved film franchise has left fans with even more to love and remember for years to come.