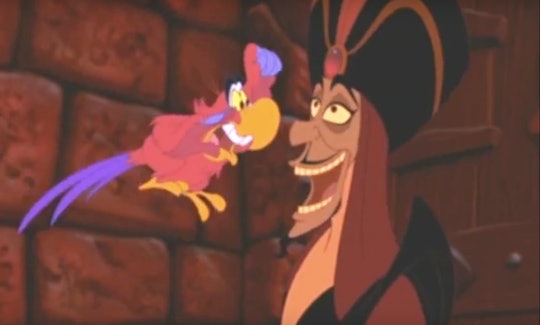 You've Definitely Heard The Voice Behind Iago In The New 'Aladdin'

When Disney’s live-action Aladdin hits theaters May 24, a brand-new cast will take viewers on a journey of adventure, romance and intrigue. The characters will be our familiar favorites though, including the return on one wise-cracking villainous sidekick who was one of the highlights on the 1992 animated version and its sequels. That would be Iago, the brash parrot who teams with Jafar to steal the genie’s lamp and the sultan’s power. In this iteration, who voices Iago in Aladdin? Alan Tudyk’s name might not be as familiar as some, but his voice should be readily recognizable.

Tudyk is a fan-favorite actor, who The Hollywood Reporter announced as the voice of the parrot just two months before the film was due to hit theaters. That same day, Tudyk dropped the news to his Twitter feed, captioning “Same studio, different bird,” onto an article about the casting. That’s a reference to one of Tudyk’s previous roles, as the chicken Heihei in Disney’s 2016 hit Moana.

And that wasn’t his only foray into the world of Disney; Tudyk recently stole hearts with his comedy-gold android K-2SO in Rogue One: A Star Wars Story. Long before that, he made a name for himself in another space adventure, playing the character Wash on the short-lived TV show Firefly and its follow-on movie Serenity. About the same time, he made a splash as the character Steve the Pirate in Dodgeball: A True Underdog Story. Other work includes Arrested Development, Dollhouse, Abraham Lincoln: Vampire Hunter and Maze Runner: The Scorch Trials, according to his IMDb page.

Tudyk has an impressive lineup of voice-acting credits, too. He’s appeared in features like Zootopia, Wreck-It Ralph, and Big Hero 6, as well as shows including American Dad! and Robot Chicken. A variety of video game voice roles also crowd his resume.

You can watch Tudyk run through some of his Disney voices with whip speed below:

Even more enjoyable, see him wryly note, after recording caws and cackles for his role as Moana’s birdbrained chicken Heihei, that he is Julliard-trained.

How Tudyk’s Iago will differ from the version crafted more than two decades ago by Gilbert Gottfried for the original Aladdin is still anyone’s guess.

In the trailers, we hear some background bird noises, but there’s no hint given as to Iago’s personality. Would it be weird to have a live-action parrot with an attitude? Frankly, if they can pull it off, it would be pretty amazing.

What can be gleaned from the trailers is that the plot of the film pretty faithfully follows the one set out in the classic tale. A street urchin named Aladdin is trying to make his way in the city of Agrabah when he runs into the headstrong Princess Jasmine in the marketplace. Cue a smitten boy. The villain Jafar recruits Aladdin to steal a genie’s lamp from a mysterious cave, with designs on overthrowing the sultan. Aladdin keeps the lamp for himself, intent on using the genie’s magic to win over his love.

It’s bound to be anything but derivative, though, starring a cast of relative unknowns alongside megawatt star Will Smith as the genie. Mena Massoud stars as Aladdin, Naomi Scott as Jasmine, Navid Negahban as the Sultan and Marwan Kenzari as Jafar. Look for Nasim Pedrad and Billy Magnussen as original characters.

More Like This
Zac Efron Was Asked If He Wants Kids & His Hilarious One-Word Answer Says It All
Blake Lively & Anna Kendrick Will Reprise Their Roles As Twisted Moms In A Simple Favor 2
The Best Family-Friendly Movies To Get You In The Mood For Summer
Are You There God? It’s Me, Margaret Is Finally Heading To The Big Screen