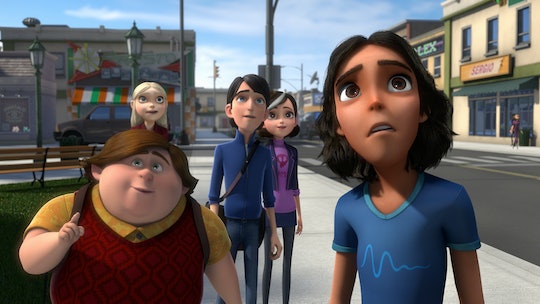 Here's Where You've Heard The Voice Of Krel On '3Below' Before

This month, Netflix drops the second installment in the Tales of Arcadia television trilogy, from series creator Guillermo del Toro. The second series, titled 3Below, follows Aja and Krel, a pair of teen alien siblings who also just so happen to be royalty on their home planet. Unfortunately, they've been driven away from that home by civil war. So fans tuning in to the highly anticipated new series may be wondering: who voices Krel on 3Below? His voice is pretty recognizable to die-hard Star Wars fans.

Krel is voiced by none other than Diego Luna of Rogue One fame. He also stars in another extremely popular Netflix spin-off, Narcos: Mexico, and he's got another critically acclaimed film in theaters right now: he plays Pedrocito in Barry Jenkins' If Beale Street Could Talk.

Getting his start in telenovelas, the Mexican-born actor has done it all, from blockbuster hits, to foreign films, to Oscar-bait. In the 2000s, he had roles in Dirty Dancing: Havana Nights, Y Tu Mamá También, and Milk. And 3Below links him up with Mexico's most recognizable director.

In a joint interview with Syfy, Luna talked about what it was like to work with del Toro and what being in a project for kids means to him, as a dad himself. According to Syfy:

Luna (who plays the alien prince, Krel) said that anytime del Toro calls anyone in Mexico, "they melt." He was interested in the immigration aspect of this story, though his kids also loved Trollhunters and were very excited that he would be joining that world. He also likes that he's once again doing a project that he doesn't have to hide from his kids. Luna does a hilarious impression of del Toro, madly saying, "Ohhh, it's gonna be GREAT!"

3Below follows Aja and Krel as they get bounced from their home planet and marooned on Earth, which in the world of the series, is the most primitive planet in the galaxy. Surely, hiding out in this miserable place, they're safe from the evil forces drove them away from home. But they also wish to return and take back their planet.

With the help of a cast of characters including their bodyguard (voiced by Parks and Recreation's Nick Offerman) and an alien mothership (voiced by Emmy Award-winner Glenn Close), Aja and Krel find a way to forge a path back home again. Even though the series is made for kids, the stunning visual storytelling from one of the most prolific directors in fantasy, the all-star cast, and the heart-wrenching themes make the show totally compelling for adults, too. Although there's no word yet on how many seasons it will span, the first season of 3Below: Tales of Arcadia drops on Netflix Dec. 21.