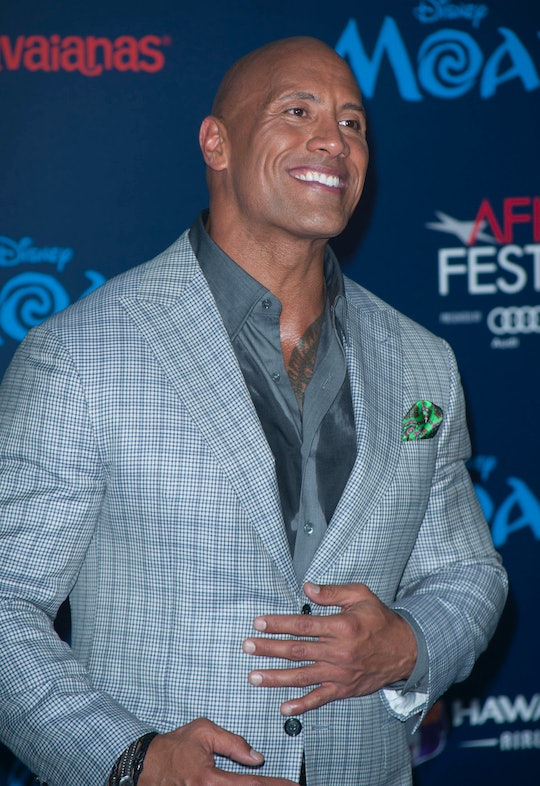 Who Voices Maui In 'Moana'? Dwayne Johnson Takes On The Demigod Role

The new Disney film Moana breaks all expected molds as audiences around the world are taken on a journey through young Moana's eyes. The new "princess" — trust me, that phrase if controversial to Moana, herself — teams up with a demigod legend, Maui, in the film to defeat a curse that has plagued her home from the lush and vibrant atmosphere it has become used to. Maui is tatted up from ankle to neck, having earned each work of art on his body. Like Lilo and Stitch's Stitch, Maui is a little misunderstood, but has a big heart, and good intentions locked deep inside. Now that we know a little bit about him, let's find out who voices Maui in Moana.

No one could have taken on the role quite like Dwayne "The Rock" Johnson. "Samoa is in my blood," Johnson said at Disney's D23 Expo in California, so it's fitting that he take part in representing the South Pacific. The former WWE superstar brings a lighthearted air to the film, even the ugliest of situations don't seem too bad with him around. The relaxed voice he lends to Maui is also able to sing. Who knew "The Rock" was cooking up some catchy beats in his diegetic song "You're Welcome?" His pliable acting skills continue to impress.

Maui's voice isn't the only part of him that tells his story — his body does, too. “Maui’s a walking billboard of all his exploits,” [co-director John] Musker says. In the film, Maui's backstory is shown through the images tattooed on his body. He even has a tattoo that interacts with him throughout the movie, speaking the truth and acting as an angel on his shoulder (OK, maybe on his pectoral muscle).

“We call the tattoo Mini Maui; it’s Maui’s little sidekick,” Clements says. “It acts as his own conscience, à la Jiminy Cricket,” Musker explains. “He doesn’t speak, but he has a relationship with Maui, and there’s humor and storytelling that wraps around him. It’s been really fun to wed the hand-drawn world with the CG world.”

Speaking of sidekicks, Maui does not take the lead in his journey with Moana. Instead, the two are equals. Sure, Maui is a master way-finder, but Moana brings experience to the table that he can not compete against. It is what makes them so great together. They're a team, not a legend and a young girl.