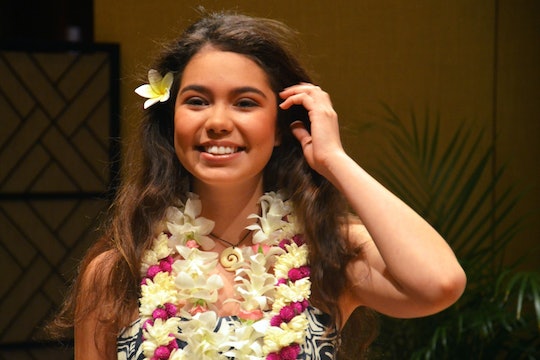 Who Voices Moana In Disney's 'Moana'? Auli'i Cravalho Is A Talented Newcomer

It's safe to say that most people recognize Dwayne "The Rock" Johnson from his wrestling days and beyond. He has been in Central Intelligence, Furious 7, The Other Guys and now, he is voicing demigod, Maui, in Disney's upcoming animated feature film Moana. But he isn't the only person people are going to be wondering about, there's also the new Disney Princess who will undoubtedly steal the hearts of millions. So, who voices Moana in Disney's Moana? Disney's newest princess is voiced by Auli'i Cravalho. It's divergent to see Disney pair such an experienced actor with a fresh face, but it is certainly a great move, since the actress is so talented.

Disney reports that after hundreds of girls tried out for the part, Cravalho was discovered by a Hawaiian casting agent after a charity singing competition. She was then flown to Los Angeles to audition for Moana. With a smile, Rachel Sutton, the casting director for Moana, claims that Cravalho was the "very last girl that [she] saw on [her] last day of casting."

According to a Walt Disney featurette on YouTube, Cravalho was told by the directors and producers of the movie during her online call-back session that she had to do a bit more adlib. "Imagine we gave you the part to Moana" Cravalho was instructed. Then finally, she received the good news: the producers weren't pretending, she was in fact going to be Moana. The teen jumped up and down rejoicing her new role as she called her mother. During the phone conversation, the producers laughed in the background of the video call from Burbank, California.

Now that we know how the voice of Moana was discovered, let's learn a thing or two about the Hawaiian local:

She Was Casted At Only 14-Years-Old

She attends Kamehameha Schools on Oahu, and in an interview with Hawaii News Now, she lets fans in on a fun fact that, despite her rise to fame, sh still does chores.

According to Hawai'i Magazine, Auli'i Cravalho is Native Hawaiian, and Chinese, Portuguese, Puerto Rican and Irish.

She Challenged Dwayne "The Rock" Johnson To An Eyebrow Standoff

She Doesn't Own A TV Because She Loves The Ocean

That's right, she is a true embodiment of Moana. In an interview with Hawai'i Magazine, she stated that, “I love the ocean, I love to read and I don’t have a TV. With all of that, I think it deepens the need to go outside and be outside… I sometimes do my homework at the beach.”

Her Favorite Disney Movie Is Mulan

In the Hawai'i Magazine interview, she names Mulan as her favorite Disney film. "She really brought honor to her family and that’s something, that especially this role [Moana], really does honor my awesome culture that I’ve grown up in,” Cravalho confessed.