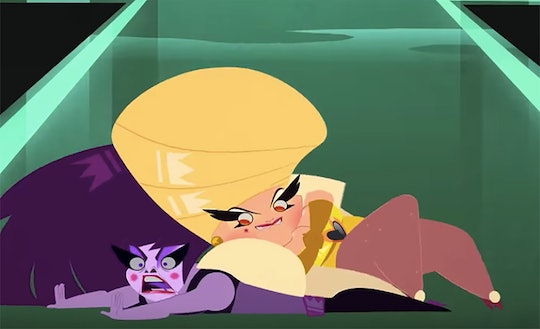 Netflix's Super Drags is probably one of the most unique cartoons available for streaming. Want some proof? The series follows three gay friends who transform into crime-fighting drag queens at night. And given the show's amazing premise, it's no wonder why many people want to know who voices Patrick in Super Drags.

The gay co-workers — Patrick, Ralph, and Donizete — work in a department store by day, but at night, the group transforms into fabulous drag queens. Patrick aka Lemon Chiffon, bands together with Cran's Sapphire and Crimson Scarlet to battle Lady Elza, a shady villain committing hate crimes against the LGBTQ+ community.

Lady Elza's biggest offense? "The evil Drag Queen" has been committing "hate crimes against the LGBT community by attempting to take away all the glitter in the world," according to the Daily Express.

We are thrilled that our first Brazilian animation will present our audiences with the daring, scandalous and fabulous world of Super Drags! Netflix is ​​fortunate to invest in great animation talent from Brazil, bringing the vibrant trait of Combo and the acidic mood of our producers to the beautiful and the canvases from every corner.

Luckily for those who don't speak Portuguese, the show is dubbed in English with the help of some amazing voices. One of those actors is Ginger Minj ( Joshua Allan Eads) who competed on Season 7 of RuPaul's Drag Race.

Ginger Minj, who placed in the top three for Season 7, took to Instagram in October to announce his exciting new role as Patrick aka Lemon Chiffon.

"Lemon Chiffon is a little bit sweet, a little bit sour, and always down for kicking some ass!" he wrote. "Can’t wait to share @superdrags on @netflix with the rest of the world on November 9th! #gingerforursula#superdrags."

Outside of Super Drags, Ginger Minj enjoys a busy career in the entertainment industry. Want some proof? The television personality is set to release his album, Clown F***er, in December 2018.

He wrote on Twitter in May: "Longer post coming soon, but this past week has been beyond incredible! Recorded my new #album, met thousands of fans at #dragconLA2018 and explored #Disneyland with some of my favorite people. Life is awesome even at its busiest!"

Additionally, Ginger Minj will star in Dumplin', a comedy-drama about a "plus-size, teenage daughter of a former beauty queen who signs up for her mom’s pageant as a protest that escalates when other contestants follow in her footsteps, revolutionizing the pageant and their small Texas town," according to The Hollywood Reporter.