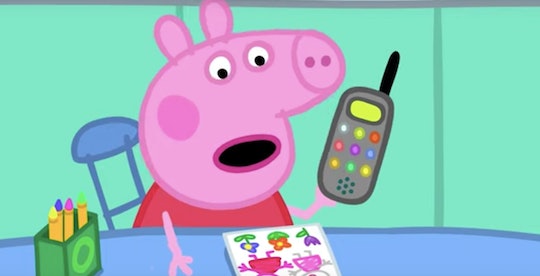 If You've Ever Wondered Who's Behind Peppa Pig's Adorable Snort, Here's Your Answer

While she easily has one of the most beloved voices in children’s television, some parents may still be curious about who exactly voices Peppa Pig and, of course, her adorable snort. Well, get to know Harley Bird, the talented star who lends her squeaky voice on the short-but-sweet episodes that are a hit with parents and preschoolers alike.

As it turns out, Bird literally grew up with the cartoon character, as she began in the role when she was just 5 years old, according to The Sun. Bird is 17 now, so she’s had to learn how to keep her voice high and light to stay constant to the sound she started so many years ago. “Obviously I've grown up a lot more and my voice has changed. You have to make yourself believe that you're a 4-year-old pig. So I have to go quite a bit higher and more childlike and a bit more cheeky with the way I talk,” she told The Sun in September 2017.

In an interview with the BBC, Bird shared that when she began there was one difficulty she had to learn to overcome: She couldn’t yet just read. "I couldn't read at all and it's a little bit difficult when you've got a 5-year-old who's meant to be reading scripts," she told the BBC in 2017. "So all the Peppa guys used to tell me how they wanted me to say the line and I just got used to copying them. So as well as doing an amazing job they were also teaching me how to read as well."

If you’re not up to speed on Peppa Pig, it is a five-minute animated series that centers on a young, anthropomorphized pig named Peppa, who lives at home with her brother George Pig and her parents — Daddy Pig and Mummy Pig — and likes to play with her friends and her teddy bear. It’s a British production, but it’s shown in 180 territories around the world, according to the The Daily Express. In the United States, it’s shown on Nick Jr. and is available for purchase on Amazon Prime Video.

Bird also has a few other acting credits to her name. According to her IMDb page, she's had roles on Doctor Who, So Sammy and in the movie How I Live Now. Bird also starred in the 2017 feature-length Peppa Pig: My First Cinema Experience. In fact, she even won a Children’s BAFTA award in 2012 for her work on Peppa Pig, according to a press release from her school at the time, Pipers Corner School.

In July 2019, the show released a music album of 16 tracks all sung by Bird as Peppa, according to Moms.com. "I am actually very excited about what people think about the new album, the songs are really good!" Bird told Moms.com in a recent interview. Bird has also been called the most successful teenage voice artist in Britain, according to VT.com.

Despite all of that success and well-deserved recognition, Bird seems to have remained a humble and down-to-earth kid. In fact, when VT.com asked what she requests in her dressing room, she adorably responded: "I don’t have a dressing room. If I did I’d quite like a Pomeranian puppy."(Ditto, Harley.) She may get that someday, as she plans to continue with her acting career into adulthood, according to The Daily Express.

So keep an ear out for the name Harley Bird. Peppa Pig fans and more are sure to hear more from this talented young star as time goes by.

More Like This
Quinta Brunson Credits Her Parents For Her Confidence, Now & As A Kid
Here's How The Cast Of 'Wednesday' On Netflix Compares To The '90s Movies
'Wednesday' Creators Say They're "Talking Amongst Ourselves About Season 2
'Workin' Moms' Has An Official Release Date For Its Final Season