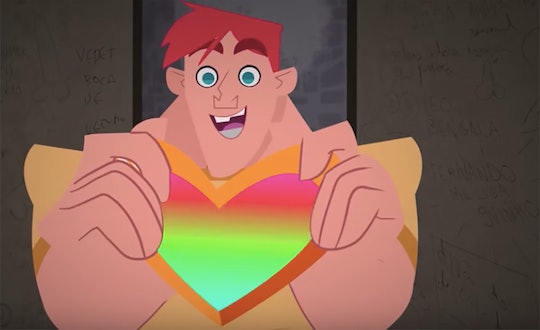 Super Drags is a new and fun series on Netflix about three gay co-workers who transform into crime-fighting drag queens at night. The series premiered on Nov. 9, and now fans want to know everything they can about the show. One of the questions viewers have? Look no further than who voices Ralph in Super Drags.

If you've never heard of Super Drags before, you're in for a treat. Essentially, the adult animated series follows three gay friends — Ralph, Donizete, Patrick — who are committed to taking down an evil drag queen named Lady Elza.

"By day, Patrick, Ralph, and Donizete are three young gay men who lead mundane lives working at a department store, dealing with annoying customers and a demanding boss, the synopsis reads, according to the Daily Express. “By night, they unleash their inner Diva to become Lemon Chiffon, Safira Cian, and Scarlet Carmesim."

Apparently, Lady Elza's sinister plan consists of "attempting to take away all the glitter in the world," an offense the group won't stand for.

“Whether they’re facing a shady customer, or outright bigotry, these queens are ready to spread their glitter and twerk away the shade," the description adds.

As for who voices Safira Cian aka Ralph? It's none other than actor Rod Keller. Fans might recognize Keller from his long list of acting credits, including Modern Family, New Girl, Shameless, and NCIS, to name a few shows.

Keller is definitely excited to be apart of the show, as evidenced by his Instagram post on Nov. 2. He wrote:

ONE MORE WEEK!!! Y’all the trailer on Netflix is different than the one online!!! Go watch!! U get to see different stuff! 😂😍I’m so in LOVE w Safira and so excited for everyone to finally meet her on November 9th!! Y’all are gonna go totally nuts when you see the full show, and I cannot wait!!! 💙

Luckily for Keller, people love the character of Ralph/Safira.

"Just watched @SuperDrags and couldn’t show how much I love Safira!" one fan wrote. "Ralph is bae, the sweetest! #superdrag."

"I have a crush on Ralph/Safira from Super Drags, there I said it!" someone else said.

Another person commented: "I wanna cuddle him."

"The best part of @SuperDrags has to be @roddyrodk character! So fucking cute!," another commenter tweeted.

All of the support and love from fans isn't lost on Keller. Just one day after the show's premiere, the actor took to Instagram to express his thanks. He said:

Thank you for all of the kind words about @superdrags today! 💖 If u haven’t watched it yet, lemme tell you, U are gonna fall in LOVE! My girls crush it hard! The scrumptious @gingerminj as Patrick/Lemon 🍋, the sickening @itsshangela as Donny/Scarlet🔥, the legendary @trixiemattel as Champagne, the deliciously-evil @willam as Lady Elza 😈, the fabulous @jeffmanabat as Goldiva💝, and yours truly as Ralph/Safira Cyan, will all be your NEW CRUSHES!!! (Mackey and I are watching it again right now!)

Yep, it's clear Keller is loving his new role as Ralph/Safira. Making matters even better? Fans love Ralph/Safira too.