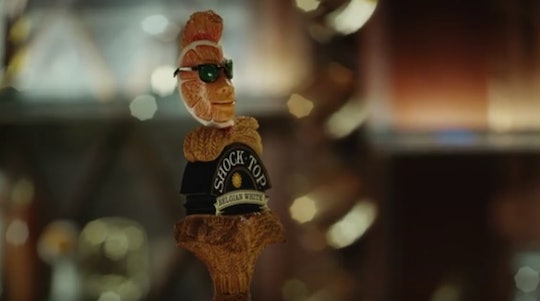 The Super Bowl is almost here, and if you’re like me and couldn’t care less about football, that means that soon we’ll get to watch the ads. Super Bowl ads are almost an event unto themselves: the huge audience means that the commercial breaks are highly coveted by companies looking to give their brands a boost, and that usually translates into big-budget commercials, that are usually mega fun to watch. One of the commercials lined up for this year’s Super Bowl, according to Market Wired? A funny ad for Shock Top beer featuring Silicon Valley’s TJ Miller. In it, Miller trades (ad-libbed!) barbs with Wedgehead, the brand’s mohawked, orange slice mascot with a sharp sense of humor. Who voices Shock Top's Wedgehead in the TJ Miller Super Bowl ad? The talking slice of fruit was voiced by comedian Martin Montana, according to Coed.

In a teaser spot released for the ad, Miller pledged that the ad would be “the greatest Super Bowl commercial of all time.” And while the jury is still out on that, casting for the commercial was pretty spot on. Thanks to his background as a stand-up comedian (he was a semi-finalist in New York’s Funniest Stand-Up Competition, according to his website), Montana is pretty well-suited to trade jabs with fellow stand-up comedian Miller.

But according to CNN, Shock Top is going to have some stiff competition for the best Super Bowl ad of 2016: other ads will feature some big names, like Ryan Reynolds, Seth Rogen, Amy Schumer, and even the late Alan Rickman.

It might not end up being the best Super Bowl ad in existence, but it’ll almost definitely put a smile on your face.