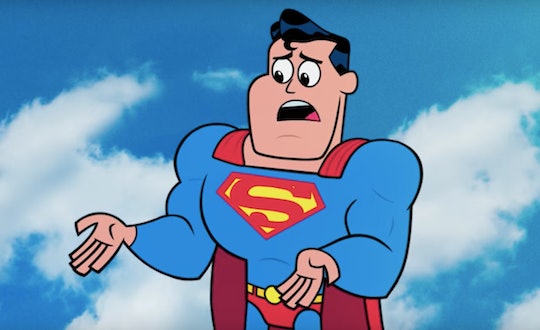 You Will Definitely Recognize The Voice Behind Superman In 'Teen Titans Go! To The Movies'

For anyone with young kids, there may be pleading right now to head out and see the new Teen Titans Go! film. If your kids win, you may sit there and drive yourself mad wondering who that voice is that sounds so familiar, but you just can’t quite place? This one might surprise a few parents though, because guess who voices Superman in Teen Titans Go! To The Movies?

The sound of the somewhat stern and patriarchal Superman comes from none other than Nicholas Cage, according to The Hollywood Reporter, playing a role that has been a dream for the actor for a long time. Lest it be forgotten, Cage’s 12-year-old son is named Kal-el, according to Cinemablend. If that sounds familiar but you’re not sure why, it’s the name Superman was given at birth on Krypton. That’s how big of a fan the actor is. (No, nobody has yet discovered how Cage got his then-wife to approve the name.)

According to USA Today, Cage also once owned an original copy of the first comic book Superman appeared in way back in 1938. He later sold it for $2.1 million, according to the publication.

Cage was set to play Superman in a Tim Burton-directed film called Superman Lives back in 1998, according to USA Today. The movie never made it into production, but according to a trailer for a documentary that was made about it, there must be quite a story to why it was shelved.

Since then, there have been three Superman movies, according to IMDb, starring two different actors. Brandon Routh played the role in 2006’s Superman Returns, and Henry Cavill in 2013’s Man of Steel and 2016’s Batman v Superman. While Cage probably auditioned for those parts, though it's not confirmed, it’s not a stretch to realize that he looks very different from the traditional Clark Kent/Superman made famous by Christopher Reeve, and producers have definitely tried to hew close to that aesthetic.

Here’s a look at how Cage’s Superman might have appeared:

Cage told USA Today that this experience was vastly different than the Superman he expected to play back then. “It wasn’t really the version that Tim Burton and I had in mind, but it was just fun,” he told the news outlet. He was able to work alongside Kal-el, who voiced the role of young Bruce Wayne. “It was terrific,” Cage told USA Today. “It was just nice to be involved in something my kid loves and we got to do it together.”

As is the case with most animated movies these days, the cast of this film is pretty well stocked with big names, according to The Hollywood Reporter. Will Arnett voices the supervillain, Slade, Kristen Bell plays a movie director named Jade Wilson, and Jimmy Kimmel is Batman, as noted by The Hollywood Reporter. The singer Halsey portrays Wonder Woman, rapper Lil Yachty is Green Lantern, and The Walking Dead actor Khary Payton plays Cyborg, the publication reported. These all star alongside the regular voice-actors for the Teen Titans Go! TV series, which airs on Cartoon Newtork.

It’s good news for Cage and everyone involved that Teen Titans Go! To the Movies seems to be performing well, with a 90 percent fresh critics rating on Rotten Tomatoes. Just in the first week of release, it’s already taken in $10 million, which is estimated to be about the same as its production budget, according to entertainment financial website The Numbers. By comparison, Hotel Transylvania cost $85 million to make and Over the Hedge cost $80 million, according to the same database.

So while it may not be the summer’s biggest blockbuster, it sounds like it's a nice option for getting out of the heat and entertaining the kids with some highly-rated (though probably a little lowbrow) humor during these dog days of summer. And along the way, you’ll get to enjoy the Superman that might have been.