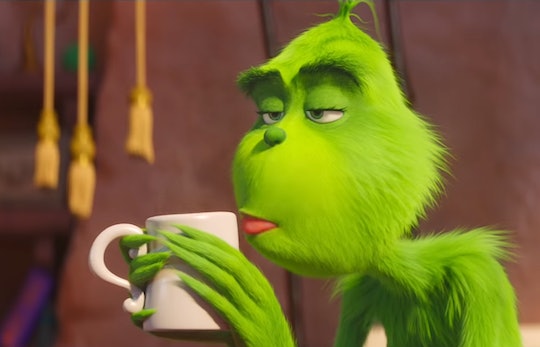 Here's Who Voices The Grinch, In Case You Couldn't Figure It Out

You may be heading out to the theater to see the new animated film The Grinch this holiday season, and as you watch it, you’ll probably find yourself wondering: Who voices the Grinch? The voice is just barely recognizable, but it’s enough to drive someone mad as they sit there trying to figure it out.

Well, wonder no more — that snarky voice acting is pulled off by none other than Benedict Cumberbatch, the man who brought us the voice of Smaug the dragon in The Hobbit, and who is beloved in the BBC’s Sherlock and Marvel’s Dr. Strange. Cumberbatch may be hard to place because he plays the Grinch with a “whining American drawl,” according to The Independent, which added that his performance was full of vim.

Joining Cumberbatch is a who’s who of top-notch talent. Pharrell Williams keeps things close to the original Chuck Jones animation from 1966 with his work as a narrator, according to CNN. Angela Lansbury is the mayor of Whoville, Kenan Thompson is an exuberant Whoville resident, and Rashida Jones is Donna Lou Who, the single-mom of Cindy Lou, according to CNN.

Cumberbatch told USA Today that when the production approached him about the role he was surprised to learn that they wanted his real voice for the part more than anything he could contrive. He said he put his foot down, telling them, “You cannot release a film with an English Grinch. It’s got to be an American.”

That Boris Karloff played the 1966 version with a British accent meant nothing to Cumberbatch since he hasn’t seen either of the two previous screen versions of The Grinch, USA Today reported.

This iteration of the story stays true to the original written by Dr. Seuss with just a few embellishments, according to CNN. The Grinch gets a backstory, which CNN says “vaguely echoes why young Ebenezer Scrooge was so hostile to the holidays.” The news outlet also notes an expanded look at Whoville, which were always my favorite scenes of the story, and a few additional characters that are used for comedic effect. Who could miss, from the trailer, that plump reindeer who seems to have joined the Grinch’s faithful dog Max?

But the overall theme of the things that are really at the heart of Christmas remains, and, unsurprisingly, the Grinch learns his lesson in love after all. None of that is being seen in the run-up to the movie however, as billboards have sprung up across metro areas to advertise the movie with Grinch-styled messages, according to Entertainment Weekly. In Los Angeles, for example, the messages tell people to stay away with “Stop moving to Los Angeles, it’s full.” In New York City one touts, “New Yorkers totally get me.”

Cumberbatch thinks the marketing campaign is genius, as Entertainment Weekly reported. “I love them. It’s so cruel. It’s great to understand his nature. It’s great that he doesn’t just exist in a mean vacuum. It’s great that he has this wonderful journey and is transformed. He has this lovely ride in the picture, but you’ve got to enjoy his meanness,” he told the outlet.

The Grinch opens wide on Nov. 9. Look for the meany to show up in your city then.