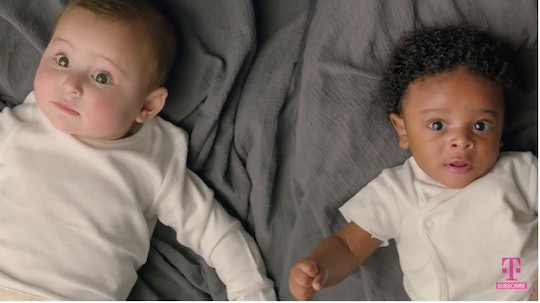 Let's be honest, a good chunk of people tuning into the big game tonight are here for one thing and one thing only: commercials. And brands are definitely banking on this fact. Whether companies connect with viewers through humor, the "awwww" factor, or any combination of strong emotions, man, were these Super Bowl ads were on-point. One of these memorable ad spots featured the cutest babies and an important message. But who voices the T-Mobile Baby Super Bowl commercial? You definitely know this famous narrator, that's for sure.

As it turns out, this powerful ad spot features the voice of Scandal actress Kerry Washington, reported USA Today. (I thought that voice sounded incredibly familiar!) The commercial begins with a lullabye playing in the background (wait, is that Nirvana's "All Apologies"?) and the camera panning over a series of adorable babies. Suddenly, Washington's soothing voice is heard speaking to the infants.

"Welcome to the world, little ones," she says. "Yeah, it's a lot to take in. But you come with open minds and the instinct that we are equal."

Some people may see your differences and be threatened by them. But you are unstoppable. You'll love who you want. You'll demand fair and equal pay. You will not allow where you come from to dictate where you're going. You will be heard, not dismissed. You will be connected, not alone. Change starts now."

(Excuse me as I wipe away a tear.)

As USA Today reported, the T-Mobile Super Bowl commercial was kept secret until it ran during the big game. “About four weeks ago, we were busy cooking up the usual big-game stuff that T-Mobile has made a name for themselves with,” Nick Drake, T-Mobile’s executive vice president of marketing and experience, told the publication. “The team took a step back and said, ‘Is there something more important that we should address, given the conversation that is happening in the country?’" Although you'd think babies would be a powerful, yet non-controversial route to go, Drake said he expected naysayers label it political. To that notion, he added:

This is not a political message in any way. This is a national message. … (But) I think if you’re going to put out a strong message, you’re always going to open yourselves to some criticism.

Shortly after the commercial aired, Washington took to Twitter to share her thoughts on being part of this important topic. "I’m in looooovve with this ad," the actress wrote. "Love the babies! Love the message. Proud to work with @TMobile & be the voice of this message & this Super Bowl commercial."

T-Mobile CEO John Legere also weighed in on the conversation via Twitter. He wrote, "This year, we wanted to use our #SuperBowl airtime to share that @TMobile believes we all started in the same place. We are more alike than different. And we are unstoppable."

Plenty of other Twitter users weighed in with their two cents, too. It seems the jury is out on the Nirvana song playing in the background. Some were a little caught off guard with the Nirvana-lullabye pairing.

However, some were apparently deeply offended by adorable babies and a message about equality. Yes, seriously. So much so, in fact, that they feel the need to cancel their T-Mobile plans.

Whoa there, guys. It's an inspirational commercial about babies not being able to see differences — and being encouraged to seek out equality. And that's bad how? Answer: It isn't. Also: Aren't you the same group of people who is supposed to be boycotting the Super Bowl in the first place because of the whole "take a knee" thing? Maybe it's time to a step back from the TV and allow the rest of us to celebrate this commercial's important message.