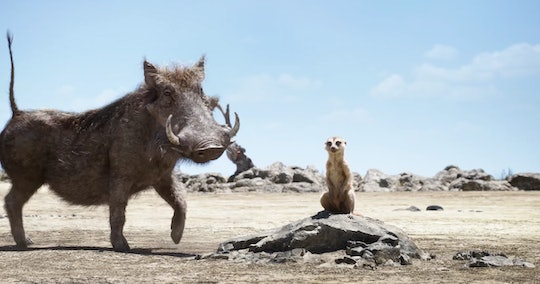 Disney has updated its classic tale of a young lion cub's adventures in growing up with its live-action remake of The Lion King. With the film officially hitting theaters Friday, viewers may wonder just who voices Timon and Pumbaa in The Lion King? Fans will immediately recognize comedian Billy Eichner and actor Seth Rogen despite their animal form.

First introduced in the 1994 classic animated film, the characters of Timon and Pumbaa quickly became fan favorites. While the meerkat and warthog BFFs are known for teaching Simba their hakuna matata philosophy, they also starred in their own animated television series from 1995 to 1999. Originally voiced by Nathan Lane and Ernie Sabella, the live-action remake of The Lion King features Eichner as the voice of Timon and Rogen as the voice of Pumbaa. And so far, critics have raved about their performance.

"While Seth Rogen's voice turns out to be an eerily good fit for a warthog, it is Billy Eichner who steals the entire show as Timon," Vox's Alex Abad-Santos and Alissa Wilkinson wrote in their review of the film. "The comedian's signature yell-shout cadence, honed to such perfection in Difficult People and Billy on the Street, seemingly finds its apex in the body of a weird little meerkat. It's glorious."

It seems as if Eichner may be just as smitten with his performance as critics have been. "It's one of the great thrills of my life to be in it and I'm SO excited for you all to see me in MEERKAT FORM," he tweeted Thursday.

Rogen has also said he was excited to take on the character of Pumbaa. "It is exciting. I was a huge fan of the movie, the original Lion King film," Rogen said in an April interview on Live with Kelly and Ryan, noting that he'd first seen it at age 12. "They didn't do remakes back then so as a kid I never thought I would get to be in it. So, that's an exciting thing."

In a Walt Disney Studios featurette about reinventing Hakuna Matata, Rogen said it was "a real honor" to be apart of Disney's Lion King remake.

"I thought I deserved it. I thought I had paid my dues and my time had come," Eichner cut in jokingly before he, Rogen, and Donald Glover (who voices Simba) erupted into laughter. All jokes aside, Eichner said he "thought it was fun to record Hakuna Matata" with Rogen and Glover.

According to the actors, part of the fun had to do with the fact that Disney brought them all into the studio at the same time rather than having them each record their parts separately. "Our rapport is incredibly naturalistic, and we really play off one another in a way that would have been impossible if we weren't actually there in the room together," Rogen recently told Variety about recording for The Lion King alongside Eichner. "Weirdly it's one of the most naturalistic performances I've ever given, and I play a warthog."

You can check out Eichner and Rogen's performance as the much beloved Timon and Pumbaa in Disney's remake of The Lion King for yourself this weekend.