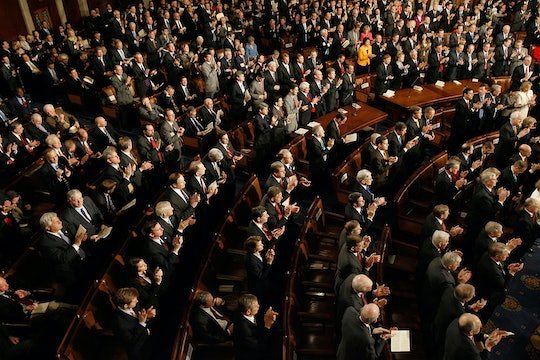 The Representatives Who Voted No On The AHCA

In a big win for President Donald Trump on Thursday, the House of Representatives narrowly passed the GOP healthcare bill — also known as the American Health Care Act — with just one vote over the necessary 216 to push it through onto the Senate. With such slim margins, you might be wondering who voted no on the AHCA bill. Even after months of edits and modification to the plan to repeal Obamacare, it appears that the Republican party is still a bit divided.

According to CNN, the bill passed with a razor-thin vote of 217 to 213. As was expected, zero Democrats voted "yes" on the AHCA bill — in fact, they reportedly waved at GOP members after the vote and sang, "hey, hey, hey, goodbye," according to NBC News, a jab at the upcoming midterm elections, which could spell disaster for the GOP due to this vote — while the following 20 Republicans broke away from their party and voted against its Obamacare replacement plan:

As CBS News reported, the GOP plan would allow insurers to charge more to people with gaps in their insurance coverage and waive some of the Obamacare requirements — including the one for pre-existing conditions. If states are granted such a waiver, insurance companies will then be able to set premiums based on someone's health status. That means the cost of health insurance could potentially be decided by a customer's current health, health history, and any pre-existing conditions.

"I worry that, under the current language, a small percentage of those with preexisting conditions may not be adequately protected," Colorado Rep. Coffman, who voted "no" on Thursday, said in a statement. "If House Leadership will work to tighten protections for those with preexisting conditions, I'm a yes on sending this bill to the Senate for further consideration. If not, I'm a no, and we’ll go back to the drawing board to clean up the mess created by the Affordable Care Act."

Although many are uneasy about the new GOP healthcare plan and not every Republican supports it, CNN reported that Trump "is confident the bill will pass the Senate" and thinks that the process has "really brought the Republican Party together."

Despite Trump's confidence, it might still be some time until the nation's healthcare legislation goes through these changes. And support for these changes, including from lawmakers and concerned Americans, still remains divided.