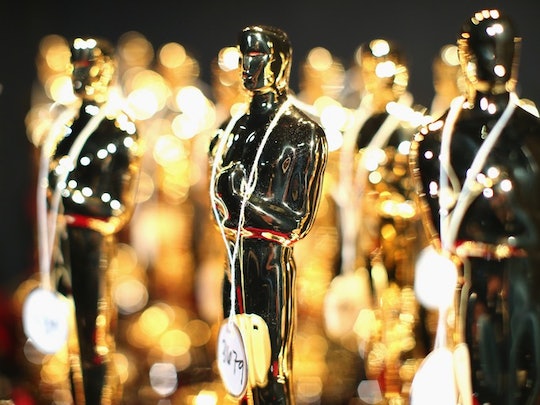 Who Votes For The Oscars? There's A Lack Of Diversity In The Academy

Most casual movie fans aren't experts on the film industry or camera angles or film scores. It's tough to say exactly who or what is worthy of an Oscar. So that's where the Academy of Motion Picture Arts and Sciences steps in. The people behind it are in the industry, and they're the ones who can properly recognize hard work when they see it. But sometimes, a movie or an actor that seems like an obvious lock will still get snubbed, which makes one wonder, just who votes for the Oscars? The answer is a little disheartening.

After Selma's snubs last year, the Los Angeles Times took a look at the stats for Oscar voters, and found that the people casting votes are mostly old, white men. That is, of the 6,028 Academy members who voted last year, their average age is 63 years old, 76 percent are male, and a whopping 93 percent are white. Not exactly your typical American. The Academy is reportedly trying to diversify, though; in contrast to its usual policy of one in, one out, it invited 276 new members last year, including Jennifer Lopez and Danny Trejo. But, according to the Atlantic, even with the Academy's inclusion, only 2 percent of Academy voters are Latino. For comparison, more than 17 percent of Americans identify as Hispanic or Latino, according to the U.S. Census Bureau. The Academy did not immediately respond to Romper's request for comment regarding how it plans to diversify.

So who are these older, white men? Technically, they really are experts. According to the Oscars website, nominations are voted on by industry professionals within the same branch, so actors vote for actors, directors vote for directors, and so on. All Academy members are eligible to vote for Best Picture. Once the nominations are in, the voting opens up, and members can vote for the winners in every category. However, Digital Spy reported that only about half of voters are "active filmmakers," meaning they've put out a movie in the past five years.

The L.A. Times ran a profile of Arthur Gardner in 2012, who, at the time, was the Academy's oldest living member at 101 (Gardner died in 2014). A sweet old man he may very well have been, but maybe not so relevant to today's moviegoer; this is a guy who knew Edward G. Robinson and Ronald Reagan personally. For perspective: He was 17 years old when the first talkie was released.

And how does someone get into the Academy in the first place? It's all about who you know. To become a member, hopefuls must acquire two sponsors who are current Academy members in the same branch (Academy Award nominees don't need sponsors). But that's not all it takes. Applications are then reviewed by branch committees before being considered by the Board of Governors. That's a lot of hoops to jump through, and a lot of people to impress. So perhaps it's no surprise that those older men keep bringing more older, white men into their club; your typical young, female minority working in the industry probably doesn't do much networking on a the golf course or the country club.

So will we be seeing more diversity in the future? It really depends on the Academy itself. A couple of rule changes could really help, such as opening up sponsorship between branches, and retiring members who haven't been active in the industry since the invention of oral contraceptives. And surely the branch committees and Board of Governors could do with more diversity themselves. Absent those changes, people are unlikely to see much of a change in the way the voting goes; whatever movies speak to older, white men will continue to win.