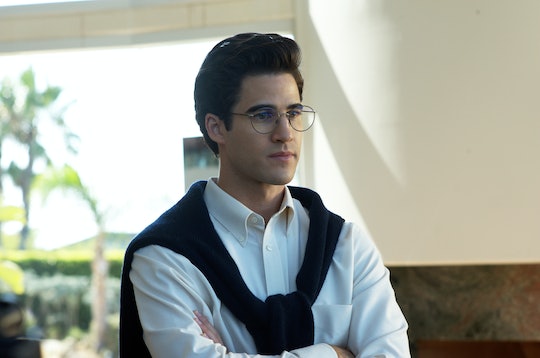 In "Descent," Andrew Cunanan hits rock bottom. He gets thrown out of his lush living situation, loses the only man he claims to love, and spirals into drug abuse. When he's at his lowest point, he returns home for the first time in the series. So who was Andrew Cunanan's mother? Upon introducing her, The Assassination of Gianni Versace provides a glimpse at the truth behind Andrew's endless lies, as well as the upbringing that made him into the desperate, greedy man he became.

Cunanan's mother was named Mary Ann Schillaci Cunanan, and on the show she is played by Joanna Adler. The show set up her arrival when David asked about Andrew's parents, hoping to get the truth for once. What he didn't know was that there were kernels of truth mixed into what Andrew told him, though dishonesty and exaggeration distorted the facts. However, one thing was an outright lie: Andrew claimed his mother worked for a New York publishing house before retiring, a glamorous story that couldn't seem further from the woman introduced later in the episode.

The real Mary Ann was a homemaker who, like Andrew said in the very first episode of Versace, was the child of Italian immigrants. Her parents moved from Palermo to Ohio, where Mary Ann was raised. She met Andrew's father, Modesto "Pete" Cunanan, after moving to California to live with her older brother after their mother died. At the time, Pete was in the Navy, though he would go on to become a stockbroker as Andrew claimed in "Descent."

Strangely enough, many of Andrew's bizarre claims to David about his childhood in Episode 6 were true. According to the book Vulgar Favors by Maureen Orth, which served as the basis for the FX show, both of Andrew's parents spoiled him utterly. He was the youngest of their four children, and seemed to get whatever he wanted even though the same wasn't necessarily true of his siblings. Andrew was given the master bedroom as a teenager, as well as his own car and an education at an elite private school called Bishop's. Even the hand-delivered lobster lunch from Mary Ann was something that really happened, at least once.

On top of fostering materialism in Andrew and catering to his every whim, Mary Ann and Pete seemed to blur boundaries with their son. Mary Ann told Orth, "Andrew was my marriage counselor. We would take walks around the block together and he would explain things to me." While it would be inappropriate for any child to act as a "marriage counselor" to a parent, the Cunanans' marriage was also particularly fraught.

Vulgar Favors presented Mary Ann and Pete's relationship as both emotionally and physically abusive. Pete believed that their second eldest child, Elena, was not biologically his and was convinced Mary Ann had cheated on him; he also resented how flagrantly she spent money. Mary Ann struggled with her mental health as well, and was hospitalized for postpartum depression after Andrew's birth.

When Andrew was around 19, Mary Ann accused her husband of embezzling more than $100,000. Though Pete denied any wrongdoing to Orth, he did sell the families' homes out from under them before abandoning everyone to return to the Philippines. He did not have a pineapple plantation as Andrew claimed, but he did stay there for the rest of his life. The rest of the Cunanans were left to scrape together enough to get by.

Mary Ann and Andrew lived together in a small apartment from a while in Rancho Bernardo. Orth wrote that Andrew could be violent with her during this time, once slamming Mary Ann "against the wall so hard that she fractured her shoulder and had to wear her arm in a sling." Despite that, Mary Ann was devoted to Andrew. After Andrew left to live with Norman Blachford, his mother moved to Illinois to be close to her two eldest children.

Always very close to Andrew, Mary Ann didn't want to believe what he was capable of even after his crimes were splashed all over the news. According to Vulgar Favors, she went on Larry King Live after Andrew's suicide and said that he was "beautiful, intelligent, handsome, bright... gifted... I just want to remember the good things."

Mary Ann's appearance on Versace was brief, but it touched on many of the important aspects of her relationship with Andrew.