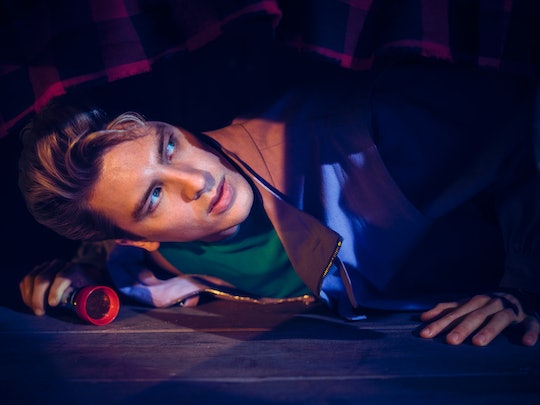 In the first episode of American Horror Story: 1984, Xavier Plympton (Cody Fern) decided to check his answering machine while on the way to his new camp counselor job. Totally normal, right? Well, the strange message awaiting Xavier was far from innocuous. In fact, it was downright threatening. But who was calling Xavier on AHS: 1984?

The voice on the machine sounded like a man, but it wasn't easy to identify the low whisper much beyond that. "You can't just take your dick and walk away," the caller hissed. "There's nowhere to run, nowhere to hide. I know exactly where you're going." They didn't leave their name or number, but Xavier seemed to know exactly who they were. He was unnerved, but didn't share what happened with his friends — and in Episode 2, it became clear why.

Initially, fans suspected that the caller was Xavier's ex, or even Xavier himself. He stated that he was a method actor, so it was possible that he was trying to get into character for an upcoming role by haunting himself with creepy calls that no one else was around to hear. But the real story ended up being simpler and yet more convoluted than that. It was also resolved somewhat quickly, at least for the moment.

Xavier offered to find a replacement so that he could be let out of his agreement with Blake. He suggested Trevor (Matthew Morrison) as Blake's new star player because he's particularly well-endowed, and took Blake around to the showers so that he could get a look at Trevor himself. (Gross, because Blake is gross.) Xavier seemed to be using Trevor as more of a distraction than anything else, because he ran for the hills as soon as Blake was looking elsewhere. He didn't have to worry about Blake for much longer, though, because Mr. Jingles (John Carroll Lynch) dispatched him with a spike to the head.

The mystery of Xavier's strange calls has been solved, but this might not be the last time his past interrupts the present. He appeared to be consumed with guilt over Blake's death in Episode 2, so he may continue to come to terms with what happened in future episodes.