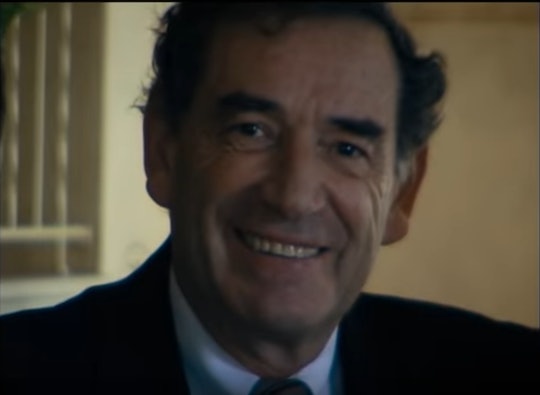 Netflix's docuseries, The Family, explores the connection between prominent American politicians and a Christian fundamentalist organization called The Fellowship. Through interviews and archival footage, the series examines the secretive group’s structure and focuses on one of its most prominent leaders. The impact he had on Washington politics is disturbing, so many are wondering exactly who Doug Coe was and how he rose to this position of power.

The docuseries, which is an adaptation of writer and executive producer Jeff Sharlet’s book, The Family: The Secret Fundamentalism at the Heart of American Power, highlights Coe’s influential role as the leader of The Fellowship aka the Family until his death in 2017. “Doug Coe is the longtime leader of the Family, who took over in 1969,” Sharlet explains in Episode 2. “He was this awkward guy out of Oregon, and he wasn’t well known in Washington. But he’s the one who decided that the Family should be an off-the-record group, hidden and invisible.”

Coe was born in October of 1928, in Medford, Oregon. His father, Milton, was the state superintendent of schools, and his grandparents were active in the church. While studying math and physics at Willamette University, Coe had a religious awakening, and went on to join a group of preachers who traveled around Oregon to spread their evangelical ideologies. This is when he met Fellowship founder Abraham Vereide, reported the New York Times, and after spending many years working with him, Coe took over the organization when Vereide died in 1969.

In Episode 2 of The Family, Sharlet explains how Coe produced Washington’s annual National Prayer Breakfast, an event which has been attended by every president since its inception in 1953. In archival footage from the events, former presidents George H. W. Bush and Bill Clinton publicly thank Coe for his spiritual support, and in an interview for the series, former president Jimmy Carter calls Coe a “fine Christian,” revealing how his role within Washington politics was “to find those who shared his Christian faith and to offer guidance” to them.

In a rare interview with the LA Times in 2002, Coe explained that his group’s mission was to create a global “family of friends” by spreading Jesus’ message to people in positions of power. He also said that his organization reached out to world leaders of all faiths, in hopes that the positive message would trickle down to and eventually help the impoverished. “The people that are involved in this association of people around the world are the worst and the best,” said Coe. “Some are total despots. Some are totally religious. You can find what you want to find.”

And in regards to the secrecy surrounding the Fellowship, Coe insisted that it was a necessary measure, for reasons of both humility and discretion. “If you want to help people, Jesus said you don’t do your alms in public,” he told the outlet. “It’s a private unknown place that offers anonymity in a peaceful environment. Part of the whole Fellowship belief is you can help people who are down and out by helping people who are up and out.”

In the docuseries, you see photos of Coe with numerous high-profile political leaders, and regardless of what you think his intentions were, you can’t dispute he left a lasting impact on the world.

The Family is currently streaming on Netflix.