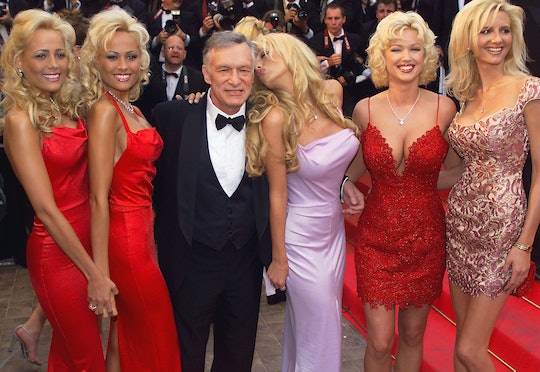 Here's What You Should Know About The Late Hugh Hefner's Wife

Late Wednesday morning news spread of the passing of Playboy founder, Hugh Hefner. According to The New York Times, the 91-year-old American icon died at home, at the famed Playboy Mansion near Beverly Hills, California. As problematic as he was revolutionary, Hefner was arguably most known for his ability to marry attractive women 1/3 of his age, well into his 80s. So, who was Hugh Hefner's wife? His most recent wife won't stand to inherit anything from his passing, but that doesn't mean their marriage, or the loss she surely feels, wasn't authentic.

Playboy Enterprises announced Hefner's death in a long statement highlighting his many accomplishments, including his "numerous accolades and awards for his contributions to society and the publishing industry," and a shout-out to this year's 10-episode docudrama series about Hefner's life, American Playboy, which appeared on Amazon. According to Playboy Enterprises, Hefner "peacefully passed away" from "natural causes." Here's an excerpt from the announcement from one of Hefner's surviving children, his son, Cooper Hefner:

"My father lived an exceptional and impactful life as a media and cultural pioneer and a leading voice behind some of the most significant social and cultural movements of our time in advocating free speech, civil rights and sexual freedom. He defined a lifestyle and ethos that lie at the heart of the Playboy brand, one of the most recognizable and enduring in history. He will be greatly missed by many, including his wife Crystal, my sister Christie and my brothers David and Marston and all of us at Playboy Enterprises."

"Crystal" refers to Crystal Harris, Hefner's surviving 31-year-old wife. Harris is a model, DJ, television personality, and former Playboy Playmate of the Month for December, 2009. Harris and Hefner married on December 31, 2002, according to The New York Times. Their road to marriage wasn't an easy one, though, as The New York Times reports:

"Five days before the 85-year old Mr. Hefner was to marry the 25-year-old Ms. Harris in June 2011 — the wedding was to have been filmed by the Lifetime cable channel as a reality special — the bride called it off. Mr. Hefner, by this time a man of the 21st-century media, announced on Twitter, “Crystal has had a change of heart.”

The two met on the set of Hefner's hit E! reality television show, The Girls Next Door. The show premiered in 2005, giving fans an inside look into the life of Hefner and his, at the time, three girlfriends, Kendra Wilkinson, Bridget Marquardt, and Holly Madison. When the original three ended their relationships with Hefner and went their separate ways, the mogul replaced them with three other girlfriends: a set of identical twins, Karissa and Kristina Shannon, and his late wife, Harris.

At 60 years his junior, multiple media outlets were quick to report that Harris wouldn't stand to gain anything from Hefner's death. According to The Sun, Harris was reportedly not included in Hefner's will after she agreed to sign an "iron-clad" pre-nuptial agreement. Instead, according to Us Weekly, "the Playboy founder’s $43 million fortune will be divided between his four children, the University of Southern California and a list of charities."

Hefner is survived by his four children: Christie Hefner, "who served as CEO of Playboy Enterprise for more than 20 years David Hefner, Marston Hefner, and Cooper Hefner, who currently serves as Chief Creative Officer at the company," according to Playboy Enterprise.

Hefner was also married twice before marrying Harris. He was married to Millie Williams from 1949-1959, and Kimberley Conrad from 1989-2010, according to The New York Times.