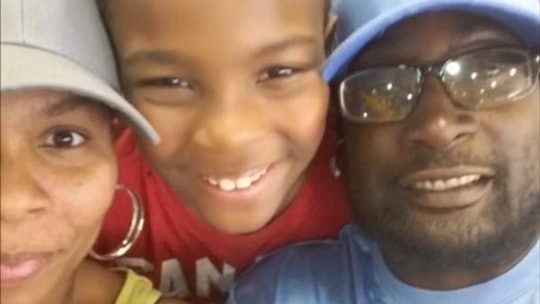 Who Was Keith Lamont Scott? The Father Of 7 Was Fatally Shot By Police

Violent protests erupted in Charlotte, North Carolina, on Tuesday night, following the fatal shooting of Keith Lamont Scott, a black man, at the hands of the Charlotte-Mecklenburg Police Department. Officer Brentley Vinson, who is also black, has been placed on paid administrative leave, which is standard procedure for any officer-involved shooting. According to a GoFundMe account set up for his family, Scott leaves behind his wife, Rakeyia, as well as seven children. Scott was reportedly waiting for his son's school bus when the incident occurred. The Charlotte-Mecklenburg Police Department did not respond to Romper's request for comment, and neither did Scott's family.

Police say that they arrived at The Village at College Downs apartment complex in Charlotte's University City neighborhood in search of a suspect with an outstanding warrant when they say they observed Scott exit his vehicle while holding a handgun, and then get back into the vehicle (North Carolina law prohibits the concealed carrying of firearms without a permit, but "a weapon carried openly in an automobile" is not considered to be concealed). According to the police, they then approached Scott's vehicle, and he again exited with a gun in hand. After repeatedly telling Scott to drop what they thought was a gun, they opened fire. Scott was taken to Carolinas Medical Center, according to local news station WSOCTV, where he was pronounced dead. Scott's brother and sister maintain that Scott was holding a book, not a gun.

Scott's daughter posted a Facebook video soon after the shooting, according to The Charlotte Observer, in which she stated that her father was Tasered and then shot four times. She also said that Scott was disabled, though she did not specify his disability. Witness accounts vary on whether Scott was holding a book or a gun. The Observer noted that Scott was convicted in April 2004 of misdemeanor assault with a deadly weapon, but the type of deadly weapon used is unclear. Speaking on behalf of the Scott family in a press conference, a woman identified as Annette Albright emphasized that "what he's done in the past is not relevant."

During another televised press conference, Chief Kerr Putney stated that Officer Vinson was wearing plainclothes and a bulletproof vest labeled "CMPD" and "POLICE," and was accompanied by three uniformed officers. While Vinson was not outfitted with a body camera, the others were, and Putney said that the video does not show "in totality everything that occurred." The incident happened in "a matter of seconds," and Putney could not confirm whether Scott pointed a weapon at police, but he did say that a handgun was recovered in very close proximity to Scott, and no book was found. He also said that some witnesses "beyond just the officers" corroborated this version of the events. Regardless of what was in Scott's hand, his children are grieving today.