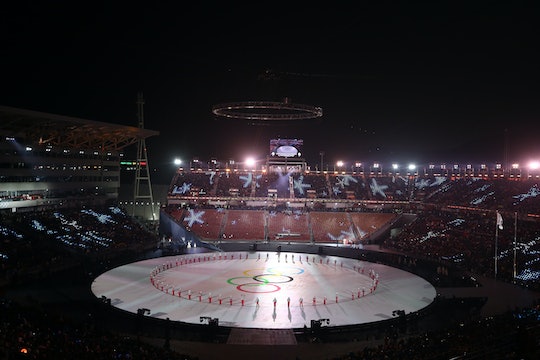 Who Was Removed From The Opening Ceremony? There Was A Security Breach You May Have Missed

While the 2018 Winter Games are all about unity, that doesn't mean they went off without a hitch. So, who was removed from the opening ceremony? Yes, there was a security breach you probably missed, and, yes, it was handled as you would probably expect. Quickly.

According to the Daily Mail, an unidentified Korean man "invaded" the Opening Ceremonies in PyeongChang, South Korea, essentially "sliding down an icy chute behind the stage before being taken away by security staff." During his "invasion," the man reportedly "attempted to accost two performers" during the Opening Ceremonies, and at the very moment when North Korea and South Korea entered the stadium during the Parade of Nations, together. As reported by the Daily Mail: "The two Koreas had marched into the stadium behind the blue-and-white unification flag, possibly indicating the stunt was politically motivated." And according to the Daily Mail, a spokeswoman for the 2018 Winter Games could only identify the intruder as a "Korean spectator" who, again, was removed from the stadium as quickly as possible.

Nothing is too quick for the internet, though, and while the moment was somewhat odd, it wasn't entirely missed by viewers, and even though NBC failed to include it in their late-night coverage of the Opening Ceremonies, which happened earlier, in real-time, Friday morning thanks to the 14-hour time difference between PyeongChang, South Korea and the East Coast of the United States of America.

Here's what Twitter had to say about the entire ordeal which, to be fair, wasn't a lot. Again, you can blame NBC for the magic that is editing:

And, not to be outdone, the unidentified Korean man wasn't the only "intruder" present at the 2018 Winter Games. According to the South China Morning Post, impersonators of both President Donald Trump of the United States and Kim Jong-un of North Korea were thrown out of the Opening Ceremonies on Friday. “We wanted to surprise everyone and bring world peace and then we’re being escorted out by security guards, which I think is really unfair,” the Kim impersonator said, according to the South China Morning Post. “Doesn’t everyone want peace?”

The "problem," of course, is that the 2018 Winter Games were already marked by a show of unity and peace, as North Korea and South Korea walked into the stadium together, under one name, "Korea," and despite the fact that the political relationship between the two countries has always been "tense," to say the least. And even though the vice president of the United States, Mike Pence, and Kim Yo-jong, sister of North Korean leader, Kim Jong Un, shared some uncomfortable (if not undeniably shade-worthy moments) during the 2018 Winter Games Opening Ceremonies, the spirit of unity was palpable as Olympians from across the globe came together to compete.

Is an uninvited guest, with even the best intentions, necessary in order to bring unity and love to the 2018 Winter Games? Well, with United States Figure Skating's Adam Rippon and United States Freestyle Skiing's Gus Kenworthy, the two openly gay United States athletes at the Winter Olympics, and in unity with the 13 "out" LGBTQ athletes competing in total, the answer is, arguably, no.

There was no need for an unidentified man to slide down an icy chute, uninvited, during the Opening Ceremonies. There as no reason for Trump and Kim Jong Un impersonators to show up, either. In the end, the only people who really need to be there — who deserve to be there — are the Olympians themselves. In other words, they got this covered.