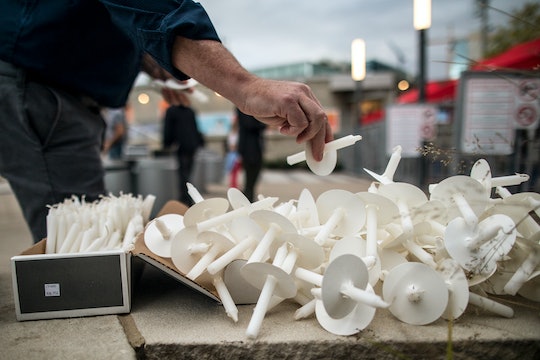 The nation woke up on Monday morning to news of the deadliest mass shooting in American history. After a 64-year-old-man opened fire on a crowd of more than 22,000 people at the Route 91 Harvest Music Festival in Las Vegas, names of the lives claimed are slowly being released by authorities, including special education teacher Sandy Casey, various media outlets reported. But, as the world takes a moment to remember each individual victim, who was Sandy Casey?

Shots began at around 10 p.m. local time on Sunday from 32nd floor of the Mandalay Bay Hotel and Casino — and ended with at least 59 victims estimated dead, along with 515 injured, according the Los Angeles Times. Casey was among some of the first victims who have officially been confirmed dead as a result of the massacre.

According to Burlington Free Press, Casey, 35, had grown up in Dorset, Vermont, but was living in Redondo Beach, California. She had taught at Manhattan Beach Middle School working for the past nine years as a special education teacher, ABC7 reported.

"She's absolutely loved by students and colleagues alike and will be remembered for her sense of humor, her passion for her work, her devotion to her students, her commitment to continue her own learning and taking on whatever new projects came her way," Manhattan Beach Unified School District Superintendent Mike Matthews told ABC7. "She's made a tremendous difference in the lives of our students and their families, many of whom worked with her over multiple years. Her loss will be deeply felt at MBMS and throughout the entire Manhattan Beach community."

A letter was sent home to district families, assuring them that continued support would be offered to students and staff. "We wanted to let you know so that you can be prepared to support your children and to help them process this information," Matthews wrote in the letter, according to ABC7. "As you can imagine, this loss is impacting many of our staff members deeply, and while we collectively grieve, we will be working to provide support to everyone affected."

According to Burlington Free Press, Casey was engaged and had attended the country music concert with her fiance, Christopher Willemse, along with a friend. Willemse took to Facebook to offer an emotional tribute to his fallen partner. “As I sit and mourn such a beautiful life gone too fast, all I can say is look up and watch the birds fly high and free today as that’s where I feel you smiling down upon all of us,” he wrote. “I love you baby girl! Love you to pieces!"

Since his fiancée's tragic death, Willemse also shared a photo on Facebook of the happy couple.

In a separate Facebook post, Willemse voiced his appreciation for the words of kindness he's received since the terrible tragedy.

Thank you, everyone of you! The love and support that she and I have received during these trying times just shows how important this wonderful woman truly was. She lived life to the fullest and made me the happiest man in the world. Im [sic] so grateful for the kind words and gestures, it means the world to me, especially for her.

Casey's family learned that she passed away at the scene of the shooting early Monday morning, according to the Burlington Free Press. "Her parents ask for prayers and privacy for her sisters, coworkers, students and large extended family," Casey's family said in a statement shared by her mother's cousin, Linda O'Leary.

As devastating as these senseless killings are — and as difficult as it is to read more about the lives that are no longer with us — it's equally important to remember these innocent victims. Say their names. Read their stories. But don't stop there — take action, contact your state representatives and let your concerns about gun safety be heard loud and clear. Do it for Casey, and for the other 58 victims who won't be returning home to their families after Sunday's massacre.