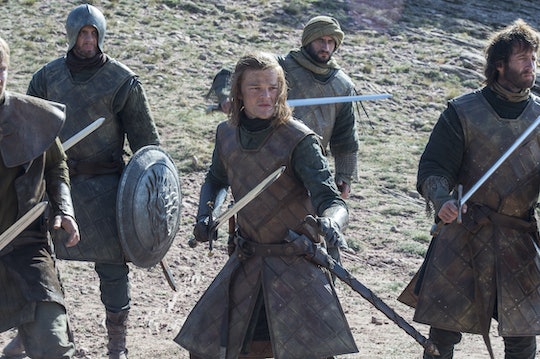 Who Was Screaming Inside The Tower Of Joy On 'Game of Thrones'? All Signs Point To Lyanna

On the latest episode of Game of Thrones Bran Stark and the three-eyed raven took another trip to the past, this time to visit the Tower of Joy. At this point you've probably heard a lot about the Tower of Joy and what's supposed to be there, but the show didn't answer that question for sure on Sunday's episode. Instead, Episode 3 showed the Tower of Joy with a woman screaming inside — we don't know who it was. But, there are theories that seem to be set into motion with that small — albeit, important — clue.

A young Ned Stark arrived at the Tower of Joy with five of his men, including Howland Reed, Jojen and Meera's father. The group of six are met by two Targaryen Kingsguards — including Arthur Dayne, the best swordsman Ned ever saw — protecting the Tower. Ned questions why they're at the Tower instead of standing by the Mad King's (Aerys Targaryen) side when he died, but Arthur says they were asked to stay at the Tower. Interesting.

Ned then asks, "Where's my sister?" referring to Lyanna Stark who was abducted by Prince Rhaegar Targaryen, but Arthur ignores the question completely and instead the two groups face off in a mini battle. Although it's six against two, Arthur is indeed very good with his swords and is able to take out almost everyone. It isn't until Howland stabs Arthur in the back that Ned can finally kill him and make his way up to the Tower of Joy.

It is then that Bran asks the question we've all been dying to know, "What's in the Tower?"

Of course, the Three-Eyed Raven is a buzzkill, so we still don't know for sure what's in the Tower of Joy. However, we did hear what sounded like a woman's screams coming from the Tower. Based on Ned's question about his sister, it's fair to assume that it's Lyanna who's screaming in the Tower.

Even so, for argument's sake let's say it's not. Maybe in some crazy twist it's actually not Lyanna and the writers have decided the R+L=J theory (Rhaegar + Lyanna = Jon Snow) is too predictable and they've decided to go in a different direction. Game of Thrones fans would probably riot if that was the case, but it's still an unfortunate possibility.

But, if it's not Lyanna, who could possibly be in the Tower? It would have to be someone Rhaegar wanted to protect, which would most likely mean a Targaryen. At this point, however, the other Targaryen siblings were no where near the Tower so the only possible answer is maybe Rhaegar had another secret child that he wanted to keep protected. This theory though brings us right back to R+L=J, because who else would Rhaegar have had a secret child with other than Lyanna?

Hopefully the Three-Eyed Raven will let Bran go into the Tower in the next episode of Game of Thrones. It's about time we finally found out the truth about the Tower of Joy.