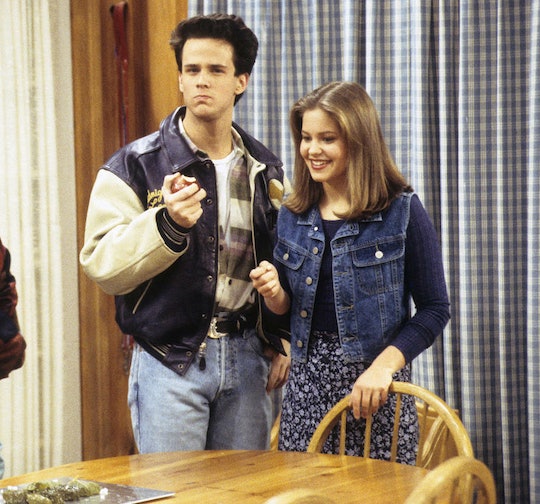 Who Was Steve On 'Fuller House' Married To? Sadly, It Wasn't DJ

Nothing gave hope to young lovers in the '90s like TV couples, and fans of Full House found their role models in high school sweethearts, DJ and Steve. But much to fans' dismay, these two didn't have any on-screen closure. The last time we saw the Full House pair, they were on their way to senior prom, leaving fans to wonder what became of them. Well, as it was revealed in the Fuller House premier on Feb. 26, the two went their separate ways and married other people. This, of course, caused many fans to wonder who was Steve married to if it wasn't the eldest Tanner?

Well, to be honest, we don't learn much about Mrs. Hale in the pilot. (Oh yeah, Steve had a last name. Shame on you for not knowing that!) What we do know is that this mystery woman and Steve are actually divorced, though the amount of time they've been divorced in unclear. During a post-party conversation about regrets, Steve reveals that he regrets marrying his ex-wife because he lost half his money and half his hair. Ouch!

So does this split mean D.J. and Steve could actually wind up together. . . forever? If you want my honest opinion, yes. Abso-freakin-lutely yes.

It is very evident in the Fuller House pilot that D.J. and Steve remain close, despite doing their separate ways after prom. I mean, she invited him to her dad's going away party after all. It's also clear that Steve till carries a torch for D.J. After greeting the other party guests, Steve goes out of his way to find D.J. and tell her that when she's ready to, "start something new or restart something old," he'll be waiting for her.

Oh, but that's not all. In addition to the regret over marrying his ex, Steve admits that he always thought he'd wind up with D.J. and that he wishes he'd asked her to marry him at prom. And although that seems like young love talking, there's also a part of it that feels like the truth.

So don't lose hope D.J. and Steve shippers! Even if they don't get together this time around, there's always hope for a second season.