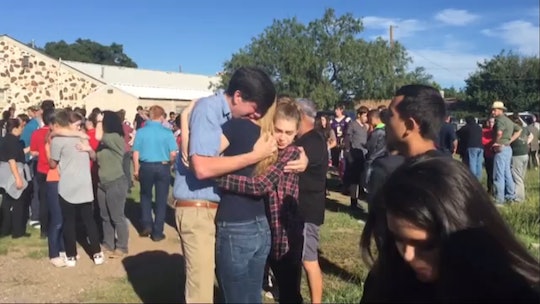 Who Was The Alpine High School Shooter? The 14-Year-Old Died At The Scene

Just after 9 a.m. CT on Thursday morning, high school students in the small town of Alpine, Texas were placed on lockdown after an active shooter was reported on the campus. According to authorities, a 14-year-old girl shot and injured another female student before turning the gun and killing herself. An officer was also injured by friendly fire while responding to the shooting. While police continue to gather evidence and investigate the scene, many may be curious about who the Alpine High School shooter was. Police have not identified the victim as she's a minor, but the teenager’s grandparents told authorities that she was a straight A student and didn’t notice any indication of any problems, making the news is especially upsetting and puzzling.

Students, who returned from summer break two weeks ago on Aug. 22, told authorities that the gunfire erupted at about 9 a.m. CT. When police arrived at the high school, they found what they first thought was a shooting victim but turned out to be the shooter.

According to NBC News, the 14-year-old freshman died of an apparent self-inflicted gunshot and was found in a bathroom with a semi-automatic pistol and ammunition near her, while the other female student who was shot was taken to a hospital. That student did not appear to have suffered any life-threatening injuries, Brewster County Sheriff Ronny Dodson told reporters.

According to KWES-TV, Dodson told reporters that he had spoken to the shooter’s grandparents and they told him she had moved to Alpine just six months ago. "We understand she was a very good student, we don't know what caused it," he told the news station at the press conference.

According to the Alpine Independent School District, there are about 280 students who attend Alpine High School in the small Texas town of nearly 6,000 residents, with about 1,000 students in the entire school district.

In the immediate aftermath of the shooting, two other schools in the Alpine Independent School District were also placed on lockdown and later evacuated as a precaution, community news site Big Bend Now reported.

The distressing news has left the small community, along with the rest of nation, in shock yet again. Videos broadcast by the press and posted on social media that show students hugging and huddling together after being evacuated from the scene serves as a reminder that, in difficult and trying times like these, it's important to come together and support one another.

The victim's family and friends, as well as her community, continue to grieve this untimely loss.