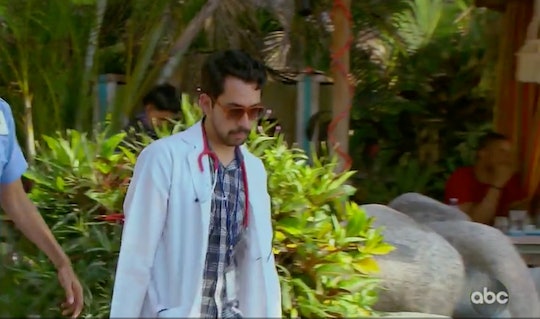 Twitter Was Confused By This Doctor On 'Bachelor In Paradise'

Tahzjuan is among the unlucky Bachelor in Paradise contestants who joins the cast as a night one elimination from Colton Underwood's season of The Bachelor. But her time in Paradise wasn't much better. For starters, JPJ got snatched out from under her by newcomer Haley, and then, she got so stressed out during their date that she nearly passed out. To top things off, Twitter found the medic who treated her to be pretty suspect. So who was the doctor on Bachelor in Paradise? It didn't help that he got edited with goofy intro music.

In the end, Tahzjuan turned out to be fine. So fine, in fact, that she was asking for guacamole and tortilla chips as producers tried to ply her with gatorade. But a very young-looking doctor sporting bright red shades and a medical coat thrown over his plaid button-down sparked questions amidst Bachelor fans. Was the regular doctor off-duty? Was this some guy the show just jobbed in to pretend to be a doctor? Ultimately, it seemed like the doctor in question worked on behalf of the hotel, given how he joined the team on the beach. Producers were also crowded around Tahzjuan, giving her liquids and reassuring her that all her vital signs were normal.

Chris Bukowski even jumped into the conversation to joke (I think?) that he'd played video games with the man in question, who he said was 23 years old. Regardless of his true identity, Twitter had a grand time dragging the poor guy for everything from his acid wash jeans to his uncanny resemblance to Robert Downey, Jr. Medics get called in on production injuries all the time, and contestants typically turn out to be OK. Paradise assumes a bit of extra risk, considering the likelihood of sunburn, overheating, and dehydration. It looks like Tahzjuan suffered from a first-timer's bout of stress combined with drinking in the hot sun, which ultimately took her out.

Other memorable BiP injuries include Evan Bass' trip to the hospital, which included an overnight stay after producers couldn't rouse him from bed following a drinking game. (This was before the franchise's recently instated drinks-per-hour limit.) Evan turned out to be fine, too, but he was instructed to have a friend stay with him in the hospital. He chose Carly, who'd spent the season up until that point being super uninterested in him. Of course, it became known as the (possibly faked?) mystery illness that changed everything; they're now married and expecting their second child!

The bottom line is, BiP contestants' bodies simply cave under the pressure sometimes, and the team of doctors, emergency responders, and medics assembled by the show have obviously done a stellar job of keeping everyone alive so far. Sadly, Tahzjuan's ~journey~ on BiP turned out to be short-lived; JPJ chose Haley and she didn't pick up any other roses, so she went home at the end of the episode. On the bright side, she did finally get her revival chips and guac.