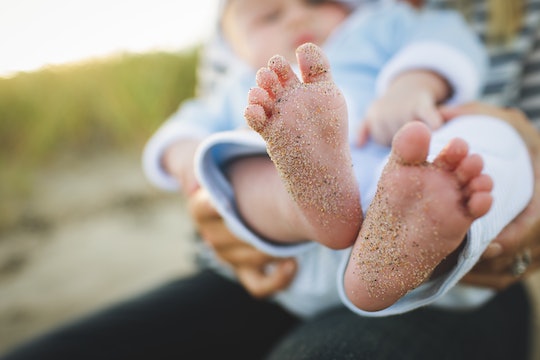 Who Was The First Gay Couple To Have A Child Together? They Paved The Way

Bringing a baby into the world is one of the most beautiful moments in life and restricting that joy only to straight couples is now wonderfully a thing of the past (at least in developed countries). Advances in genetic research in science have made it possible for same-sex couples to have a child of their own. As time goes on and society continues to progress, gay couples having their own children may one day be viewed as commonly as straight couples. Having a look back at this impressive history, who was the first gay couple to have a child together?

Research surrounding LGBT parenting first began in the 1970s and studies expanded through the 1980s as the number of gay and lesbian parents seeking custody of their biological children increased. Gay and lesbian couples have fought for their parenting rights for decades and, as far back as the timeline goes, locating the first gay couple to have a child together becomes harder and harder. Considering privacy and legal rights makes that answer even more difficult in the United States.

However, the answer is a bit clearer in the U.K. — Barrie and Tony Drewitt-Barlow are the first known fathers in Britain to use donated eggs and surrogate mothers in the United States. According to the Daily Mail, the couple, from Danbury in Essex, was the center of outrage when battling with American authorities to become the first gay couple to have both of their names of all four on their children’s birth certificates.

The pair began their journey to fatherhood more than a decade ago when research was not as easily available and seeking acceptance sometimes resulted in death threats, according to the Daily Mail.

“Eleven or 12 years ago when we started looking into this surrogacy as in it’s infancy and gay surrogacy was almost unheard of,” one of the fathers, Tony, told the Daily Mail in an interview in 2009. “We had to go to the other side of the world to California to find doctors who would first of all be able to do it and who would be willing to do it. You couldn’t just put surrogacy into Google like everyone does now.”

Barrie and Tony Drewitt-Barlow surely paved the way for future same-sex couples with hopes of having their own children. In fact, a 2010 census indicates that same-sex couples have successfully been able to become parents through whichever means they chose.

“It is estimated that more than 111,000 same sex couples – about 17 percent – are raising nearly 170,000 biological, adopted, or step children,” according to an information page by Columbia University’s Women’s Reproductive Care department. “Among female couples, nearly 24 percent are raising a biological, adopted, or step child, compared to 10 percent of male couples.”

A lot has been accomplished for gay couples wanting to have their own children in recent history, but more surely still needs to be done to ensure same-sex parents are accepted, with no stigma or prejudice, simply and only as parents.