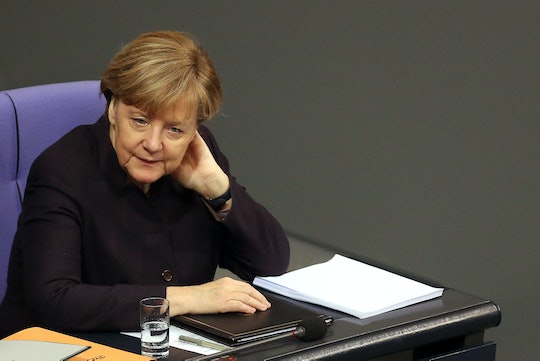 Who Was The Last Women Named 'TIME's Person Of The Year? Angela Merkel Is The First In A While

Earlier today, German Chancellor Angela Merkel was named TIME's Person of the Year for how she has handled some significant global challenges. She is working hard to restore some semblance stability and openness to European borders, she is an advocate for Syrian refugees, and she played a key part in the Greek financial crisis, and now she can check off another nearly impossible task from her list: the TIME cover. But Merkel's honor may have you asking who was the last female Person of the Year?

Merkel, 61, is also just the fourth woman to receive the honor since 1927. Yup, there have only been four in 88 years. This got me thinking about the other three, namely who was the last to receive this honor? And apparently Corzaon Aquino, the first female president of the Phillipines, was the last woman named TIME's person of the year, but that was nearly three decades ago.

In a post Wednesday, TIME explained that reason it's been so long since a woman received the honor because the honor goes to "people with institutional power," who are still mostly men:

the label of Person of the Year tends to favor people with institutional power. The choice reflects TIME’s view of who affected the news and our lives, for good or for ill. Since 1986 there’ve been four U.S. Presidents in the mix—three of them two-termers, all of them men. Plus a handful of leaders of the Soviet Union (and Russia), also all men. The Pope keeps being a man. And it’s a lot easier to make news from an address like the White House, the Kremlin or the Vatican.

Corazon received the honor in 1986. TIME’s year-end issue hit newsstands and, as was common in those pre-internet days, people probably clamored to see who made the cover. But instead of finding the Pope, Ronald Reagan, or — well — a man, they found a woman clad in a red blazer, staring straight ahead while the weight of her head rested on her chin, and in her hand. They found Corazon Aquino, the first woman president of the Philippines.

Corazon started her career as a self-proclaimed “housewife.” She had no political experience and no political aspirations. However, when her husband, Senator Benigno Aquino, Jr, was assassinated in 1983, Corazon became the most prominent figure in the People’s Power Revolution (1986), which toppled the 20-year authoritarian rule of President Ferdinand E. Marcos — whom her husband vehemently opposed — and restored democracy to the Philippines. It was then, in the aftermath of the revolution, Corazon found herself taking the oath of office, becoming the 11th President of the Philippines, the first female president of the Philippines, and the first female president in Asia.

Corazon remained in the presidency from 1986 to 1992. When she stepped down many viewed her presidency as inconsequential and uneventful, having made little impact on the country’s social and economic problems. However, many now credit Corazon with bringing democracy to their islands.

Corzaon’s appearance came at a time when the magazine still dubbed the honoree “Man of the Year.” (In fact, if you look up the table of contents for that issue, you’ll find a line that reads “Woman of the Year,” immediately followed by the parenthetical notation, [Man of the Year]). The other female honorees have been Wallis Simpson (1936) and Elizabeth II (1952).

Let’s just hope we don’t have to wait another 30 years the next.