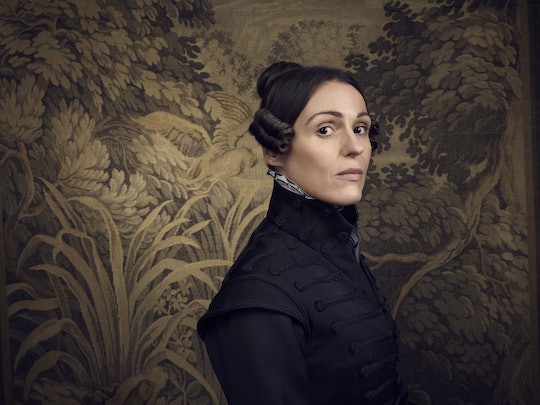 The Real Anne Lister Was Larger Than Life, Just Like In 'Gentleman Jack'

On Apr. 22, HBO premieres its eight-part miniseries about the life of Anne Lister, starring Suranne Jones as the titular diarist, landowner, and infamous historical lesbian. The dramatization comes from series creator Sally Wainwright, but viewers tuning in may be wondering who the real Anne Lister was. Gentleman Jack draws from the more than four million-words left behind by Lister throughout the course of her life in meticulously detailed diaries.

Lister lived in Halifax through the Georgian Period of British History. Although she was the second oldest of six children, only she and her younger sister Marian (played on Gentleman Jack by Gemma Whelan, whom Game of Thrones fans may recognize as Yara Greyjoy) lived past the age of 20. Beginning in 1826, according to BBC, Lister took over running Shibden Hall — her Aunt Anne's estate where she spent time as a child — when her Uncle James was no longer able to. (This is where the series opens.) It was highly unusual for a woman to do this sort of work, but Lister thrived at it, and when her aunt died in 1836, Lister inherited Shibden Hall herself. She continued running it capably until her death in 1840, dedicating her life, in part, to restoring the estate and even building a gothic library tower addition to house her beloved books.

In addition to the income she drew from tenants of the estate, Lister went on to invest in other properties in town, in the canal and railway industries, in mining, and in stone quarries. Owning and operating a coal mine was among the activities considered unsuitable for a woman, a notion which Lister bucked to her financial benefit. Because of the modest wealth she amassed, Lister was essentially able to buy her freedom. Although she was a controversial figure, she was powerful and moneyed enough to do what she liked, which included living openly as a lesbian, embodying a masculine gender presentation, and never marrying or otherwise relying on men for survival.

Lister's many romances with women were well-documented in her diaries, but because of their controversial nature, she chose to write about them — roughly one-sixth of her diaries' overall contents — in code. The code was deciphered in the 1930s, according to the London Independent, and contained a combination of Greek characters, zodiac, punctuation, and mathematical symbols, perhaps in part a nod to her love of classic literature and Grecian history.

Lister eventually settled down with a woman named Ann Walker, whom fans also meet in the series premiere of Gentleman Jack, played by Peaky Blinders' Sophie Rundle. Lister was a practicing member of the Anglican faith, and so in 1834, she and Walker took communion together on Easter Sunday at Holy Trinity Church in Goodramgate, York. It was a gesture they considered to be their marriage ceremony and they're widely regarded as the first lesbians to "wed" in The U.K., even though the union obviously wasn't legally acknowledged. Holy Trinity Church now houses a blue plaque with rainbow edging which reads "Anne Lister (1791—1840) of Shibden Hall, Halifax / Lesbian and Diarist; took sacrament here to seal her union with Ann Walker / Easter 1834."

Although the story of Lister's life has been told in a couple of BBC projects before, Gentleman Jack marks the first time she's ever gotten the extended miniseries treatment. And considering what a badass she was in real life — it's about time.

Editor's note: An earlier version of this article misidentified the date of the series premiere.