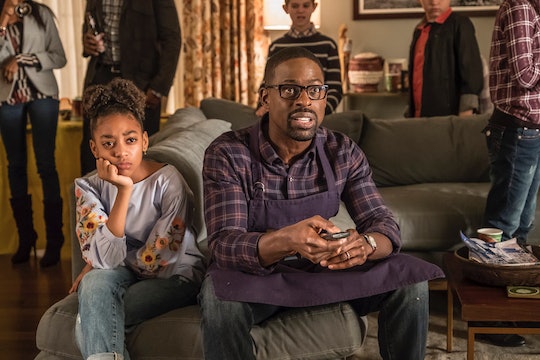 Though This Is Us dives back into the past regularly, Season 2 was the first time it ventured into the future. It introduced viewers to Adult Tess and Older Randall in "Super Bowl Sunday," and "The Wedding" revisited them once again. They were having a vaguely ominous conversation about an unnamed person, leaving viewers wondering: who were Randall and Tess talking about in the This Is Us finale?

Unfortunately, the episode never cleared it up, so that answer will have to wait until Season 3. The future scene in the finale picked up right where "Super Bowl Sunday" left off, with Randall arriving at Tess' place of work at the end of the day. He told Tess that it was time to go see "her" without specifying who the subject of their chat was. Tess said she wasn't ready and Randall said he wasn't either, but the two set off together despite not looking very happy about it.

While "her" could quite literally refer to any female-identified person (even someone the audience hasn't met yet), it feels like there are at least two obvious guesses: Beth or Deja. The only thing that's certain is that whatever's going on with "her" doesn't seem good.

It's possible that the editing of "The Wedding" provided fans with a sneaky hint, because it immediately cut from Randall and Tess' conversation to Beth and Tess at the reception. Several shots that followed foregrounded Tess with her parents, making it seem like there could be some significance there. However, Tess had also been preoccupied with Deja after she disappeared following an awkward run-in with Toby's mother. Deja had enough of an impact on Tess' life to push her into social work as an adult, so she's a fair guess too.

The next question revolves around why Randall and Tess seemed so unenthusiastic about whoever they were going to see. It was obvious that they weren't just having an everyday father-daughter get-together; something more was going on here, and it probably wasn't something positive. So, like Randall and Kevin did on their way to find Kate, let's play the worst case scenario game.

It's suspicious that Beth didn't accompany Randall to see Tess in the future, so there's a chance that she's the one they're going to visit. Beth would be about 20 years older, so perhaps she's sick or hospitalized. That would be difficult enough to deal with but maybe — and this is the worst case scenario for sure — Beth has died, and they're going to visit her grave. It's an awful thought, but fans have theorized about Beth's passing ever since "Super Bowl Sunday." An Instagram picture of Sterling K. Brown standing in what appeared to be a hospital room could be another clue that Beth is sick or dying.

However, executive producer and co-showrunner Isaac Aptaker told Glamour that there was no truth to the Beth rumors. "Beth's OK," he said. "I don't know where that came from, but there's no conspiracy."

That could mean the mysterious "her" in question is actually Deja. There's just as much of a chance that she is in the hospital for some reason, because being young doesn't mean she can't get sick or be in an accident. And it seems like she's going to become a permanent part of the Pearson family, so there's no reason to think that she wouldn't still be around in the future.

Still, whatever is going on does seem to be worrying and there's so little to go off of that the possibilities are endless. Luckily, fans will have several months to speculate, because this situation won't find its resolution until next season.