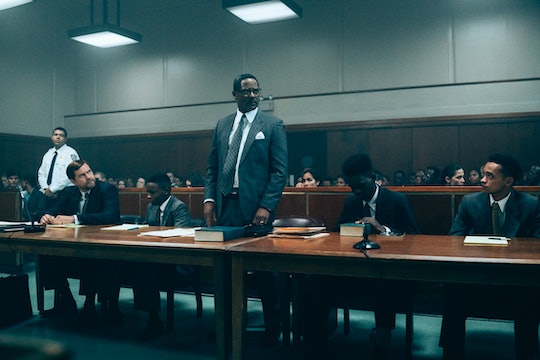 Ava DuVernay's limited series When They See Us revisits the case of the Central Park Five: five teenagers who were arrested and convicted of a brutal crime they did not commit. In 1989, a white woman jogging in Central Park was attacked, raped, beaten, and left for dead. Five boys of color were arrested for the crime, though there was no evidence (and only coerced confessions) linking them to it. The lawyers who defended the Central Park Five weren't able to prevent them from being convicted, and they spent years behind bars before they were cleared.

When They See Us premieres on Netflix on May 31. The four episodes follow Antron McCray, Raymond Santana, Kevin Richardson, Yusef Salaam, and Korey Wise from the day the crime was committed to their convictions being overturned more than a decade later. The trial takes center stage in the second episode, and it's an important part of the story. Despite the fact that DNA found on the scene did not match any of the boys and their confessions were allegedly obtained after days of denied sleep, as reported by The Guardian, the jury found them guilty.

During the first trial, Robert Burns represented Salaam, while Michael Joseph represented McCray and Peter Rivera represented Santana. Then in the second trial, Howard Diller was Richardson's defense attorney and Colin Moore was Wise's. In 2002, when Matias Reyes confessed to attacking the jogger, there was a defensive motion to set aside the previous convictions. Michael Warren became the defense attorney for McCray, Richardson, and Santana at that time.

According to a New York Times article from 1990, the defense attorneys were criticized from the start for the way they approached the case. It stated that "the defense lawyers have been notable mostly for what they have not done" because they hadn't presented an alternative theory for what happened on the night in question. Instead, Rivera argued that his client was questioned without his father present, leading to the incriminating (and ultimately false) statements he made.

Burns was apparently actively ineffectual; The Nation reported that he was known for falling asleep in court, once even waking up just to object to himself. Diller and Moore differed greatly on approach, which fractured the team; Moore wanted to aggressively cross-examine the victim (which he did go on to do), though Diller disagreed. Per a 1990 New York Times article, Diller threatened to move for a mistrial if Moore grilled the woman on the stand. Moore followed through on his plan, while Diller focused instead on the questionable circumstances in which the confessions were recorded.

Former journalist Tim Minton discussed the trial with ABC News and described prosecutors Elizabeth Lederer and Robert Morgenthau as "the New York Yankees" while the defense team was more like "your high school baseball team." He went on to say that the defense attorneys were "outclassed, out-strategized and outlived in terms of their ability to survive a case like this."

The taped confessions, however they were acquired, proved too difficult to overcome. But after Reyes' confession twelve years later, the convictions were vacated. When They See Us will take viewers along every step of the way, so they can see how it all unfolded.