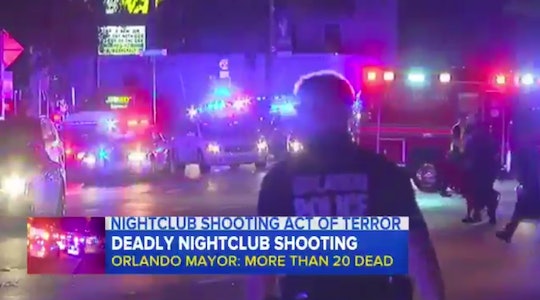 Who Were The Orlando Nightclub Victims? Dozens Were Killed In A Shooting

Tragedy has struck Orlando, Florida once again not long after the death of singer, Christina Grimmie. On Saturday night going into Sunday morning 20 people were shot and 42 were injured at a nightclub in Orlando. This leads many to wonder who were the Orlando nightclub victims? And why exactly were they targeted?

(Update: The city of Orlando has released the names of four of the victims in the Orlando terror attack. They are Edward Sotomayor Jr., Stanley Almodovar III, Luis Omar Ocasio-Capo, and Juan Ramon Guerrero.

The FBI has updated the death toll to 49 victims. The shooter was also killed.)

According to the Washington Post, the mass shooting took place at a gay night club in downtown Orlando called Pulse. The killer, who is being identified as a man named Omar Mateen, was wearing an explosive device and carrying multiple weapons. According to Orlando Police Chief John W. Mina, the killer took hostages in the nightclub as well.

But, the details from the story are still emerging and the killer nor the victims of the shooting have been identified. According to The Daily Mail, the killer was reportedly an alleged Islamic extremist. According to the FBI, the mass shooting is being identified as "an act of terrorism" — but it is unclear as to whether or not the shooter acted alone and if it was an act of domestic or international terrorism. But it is clear that the killer was not a local man from Orlando.

However, as more details emerge from the story, I am sure we will learn more about the victims and whether or not this attack was deliberate towards the LGBTQ community.

Pulse, the club where the shooting took place, describes itself as "the hottest gay bar" in Orlando. And, according to CNN, had urged party-goers to attend it's "Latin flavor" event Saturday night. At 2 a.m. however, not long after the shots were fired, the club took to their Facebook page where they posted the message "Everyone get out of Pulse and keep running."

While this shooting sparks a conversation about gun violence in the United States, terrorism and access to guns, it is incredibly important to remember whose lives were taken because of it. Luckily, there are some ways you can help the city of Orlando and to remember the victims. Efforts to donate blood to those injured in the attacks and donations to the Orlando Regional Medical Center have already been set up.

Amongst all of the new and emerging headlines from the shooting in Orlando, it is important to remember who the victims were which is something we should never lose sight of.