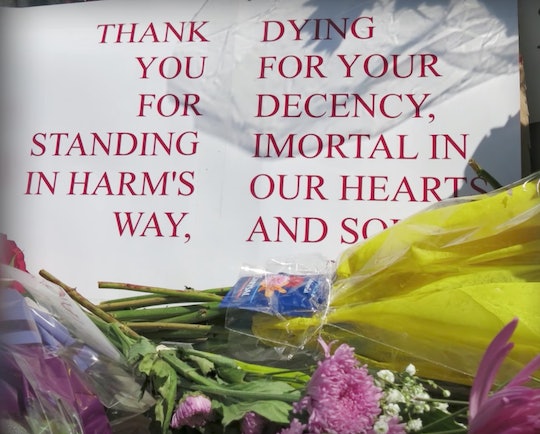 Who Were The Portland Stabbing Victims?

When a self-described Nazi reportedly launched a hate speech-filled rant on a Portland commuter train Friday, apparently directed at two young passengers who appeared to be Muslim, three men reacted to defend them. The man's hate extended to physical violence, and he reportedly killed two of those courageous bystanders by slashing their throats for confronting him. Another man was also seriously injured but is expected to survive. As the country grapples this his latest example of hate-fueled vitriol and violence, we all must confront the racism and religious intolerance that permeates our society. But in always remembering who the Portland stabbing victims were, we will also find comfort in the affirmation that there is more good than evil in the world.

After an appalling terrorist attack in Manchester, England, killed 22 last week, a quote by the late Fred Rogers went viral. "When I was a boy and I would see scary things in the news, my mother would say to me, 'Look for the helpers. You will always find people who are helping,'" the TV personality had said years before — but his words endure as a bittersweet tribute to Taliesin Myrddin Namkai Meche, Ricky Best, and Micah David-Cole Fletcher after Friday's truly senseless tragedy. Which is why those who knew them as well as those who didn't are celebrating them for their bravery, strength, and demonstrated dedication to helping other people.

Ricky Best died at the scene after the perpetrator, 35-year-old Jeremy Christian, allegedly stabbed him; Taliesin Myrddin Namkai Meche died at the hospital a short while later, according to ABC News. Their deaths — and the hatred that led to them — plunged those close to them into mourning in addition to attracting national media attention. And the family of Namkai Meche, who at 23 was a recent college graduate, has been especially vocal in publicly memorializing him. The day after the attack, his mother took to Facebook to pay tribute to her son, writing that he was a hero:

Taliesin Myrddin Namkai Meche, My dear baby boy passed on yesterday while protecting two young Muslim girls from a racist man on the train in Portland. He was a hero and will remain a hero on the other side of the veil. Shining bright star I love you forever.

According to CNN, Namkai Meche had graduated from Portland's Reed College with an economics degree in 2016 and was working at an environmental consulting agency at the time of his death. Just starting out his adult life, he had recently purchased a house and was looking forward to getting married and starting a family one day.

In another Facebook post, his sister Aurora Dachen wrote that she was "proud to be able to call someone so brave and strong my big brother" and vowed to "forever cherish every memory" she has with him. In a statement distributed to Reed College students, professor Kambiz GhaneaBassiri remembered Namkai Meche's "probing, intelligent" questions and called him a "wonderful human being," CNN reported.

While Namkai Meche wanted to have a family, Ricky Best leaves behind one of his own. A 53-year-old army veteran, he was the father of three teenage sons and a 12-year-old daughter, according to The Oregonian. At the time of his death, he worked as a technician for the city Bureau of Development Services, but also served in both Iraq and Afghanistan over the course of his 23-year career serving the country. And to assist someone else in need was exactly the type of thing he would do, his current supervisor, Kareen Perkins, told the newspaper:

He was always the first person you would go to for help. I've talked to most of his coworkers today, and several of them said it's just like Rick to step in and help somebody out.

The same goes for Micah David-Cole Fletcher, who is 21 years old and expected to survive the serious injuries for which he is being treated. His friend Elie Hoover described him to BuzzFeed as "deeply empathetic" in reflecting on his involvement and role in the deadly incident. "I was shocked it was him, but I wasn't surprised it was him," she said. "I can't see him not standing up."

A drum player, Fletcher has also been interested in poetry and music.

The alleged murderer has been arrested and charged with aggravated murder, attempted murder, intimidation in the second degree, and felony possession of a restricted weapon, according to The Los Angeles Times.