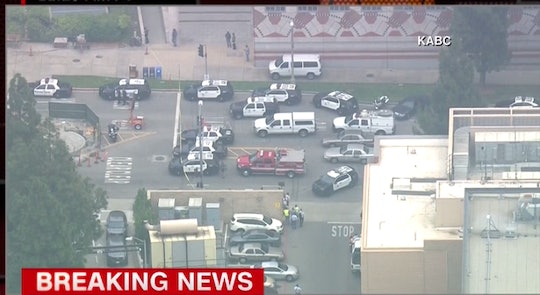 Who Were The UCLA Shooting Victims? Details Are Scarce

The University of California, Los Angeles went into lockdown after police responded to an active shooter report on Wednesday. UCLA police initially reported that there were at least two victims, and confirmation by the LAPD and LAFD further confirmed that both victims had died. Details about who the UCLA shooting victims were were scarce as police attempted to evaluate and eliminate any threat to the campus, which remained under an active shooter situation at press time.

The incident began at around 9:55 a.m. PT, according to authorities. The shooter remained at large, according to LAPD spokesperson Tony Im. "We are still in search for the shooter," he told reporters. "It's still a very fluid situation. Police and SWAT teams are currently sweeping campus buildings near the Engineering IV and Boelter Hall in central campus where the initial attack allegedly took place. LAPD Captain Andy Neiman said that while the department's bomb squad had responded to the situation, there have been no reports of explosive devices on campus. The incident prompted a massive response from both local and federal law enforcement agencies; ATF, FBI, and LAPD officers are on the scene.

During a press conference, UCLA Police Chief James Herren told reporters, "We're still searching to see if there is a suspect that may be in the area." He did note that it was possible one of the two victims killed in the shooting was in fact the gunman, but did not elaborate.

Neiman warned the public to stay clear of the campus as the police conduct their search. "Our tactical teams are going in with SWAT, and we're going to do this very methodically," Neiman said at a press conference.

More than 43,000 students are enrolled at UCLA, according to the school's website. Students have been told to stay inside and shelter in place while the shooting incident is still active. In video taken at the scene, you can see students being led out of buildings by SWAT team members in straight lines with their hands above their heads.

There are little details about the two victims or the shooter. It is unknown at this time if the two people killed were students or employees. The Daily Bruin reported that the shooter was seen wearing a black jacket and black pants, although this has yet to be independently confirmed by police.

Mehwish Khan, a 21-year-old psycho-biology student, spoke to The Los Angeles Times on her cellphone while taking shelter in the library with several other students. "The whole campus just started running and I started running too," she said. "Everyone was very confused. We got in a building and no one knew what was going on."

"A lot of people thought it was a joke or a drill," she said.

The vice president of UCLA's student government, Rafi Sands, told reporters that he and roughly thirty other classmates used belts to lock the doors to the classrooms they were in after hearing about the shooter Wednesday morning. He noted that him and his group didn't understand the severity of the situation at first. "We get a lot of Bruin Alerts for small things," he said referring to text alerts sent campus-wide. "It took a while for every to realize this is serious."

Sonya Gavin, a UCLA employee on campus currently locked down told CNN that the campus was extremely busy in the lead-up to final exams. Gavin said the situation wasn't particularly shocking. "It doesn't really surprise me because this has happened elsewhere," she said. "This is something that we figured it was only a matter of time."

Indeed, school shootings have become ubiquitous in America. According to Newsweek, 142 school shootings have occurred in the United States since 20 young children and six teachers were killed at Sandy Hook Elementary School in Newtown, Conneticut, in December 2012. (It should be noted that number was calculated in October 2015 and does not include any more recent shootings between then and now.)

Unfortunately, it seems that until common sense gun restrictions are put into law, this won't be the last deadly shooting we hear about on campus.

More Like This
Post Malone Shared A Bunch Of Sweet & Candid Details About Life With His 4-Month-Old Daughter
Exclusive: Your Favorite Yeti Is Back With More Adventures In New 'Abominable' Series
10 Horror Movies With Creepy Kids That Will Scare The $#*% Out Of You
The Complicated Targaryen Family Tree From House of the Dragon Explained