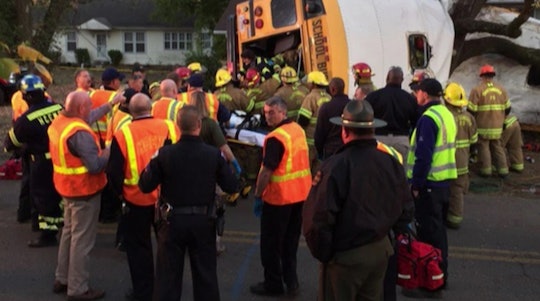 Who Were The Victims Of The Chattanooga School Bus Crash? At Least 6 Have Died

At least six children have died after a school bus that was carrying dozens of students crashed in southeastern Tennessee on Monday evening. The devastating news may have some wondering about the identities of the victims from the Chattanooga school bus crash. According to CNN, the children reportedly range in age from kindergarten to fifth grade, five of whom died on the scene, and one who passed at a hospital a short while later.

As the young victims are children, immediate information about their names and ages was not immediately released by authorities or their families. It has been reported, however, that the school bus in the tragic accident — which crashed into a tree, splitting it apart — was carrying students from Woodmore Elementary School, a public school with nearly 400 students enrolled and a predominately African American student body.

The school bus was carrying 35 students and at least 23 of them were transported to local hospitals after the crash on Tally Road, which did not involve any other vehicles.

A tweet posted on Monday evening from the Chattanooga Fire Department shows the school bus laying on its side with a tree protruding through its roof as emergency officials rescue the last victim from the back door:

The crash site is still an active scene, therefore police have not released a final number of fatalities. According to NBC News affiliate WXIA-TV, District Attorney Neal Pinkston confirmed at least six fatalities as of 6:30 p.m. on Monday.

"We do know that multiple children lost their lives today in this tragic incident," Chattanooga Police Chief Fred Fletcher told WXIA-TV. "When we know how many children lost their lives, when we have talked to their families personally, when I have talked to their families personally, then you will have a number and not a minute before."

Fletcher described the scene as "every first responder’s worst nightmare."

According to Fox News, Tennessee Gov. Bill Haslam commented on deadly bus crash, noting that the incident was an all-around "sad situation":

Following the crash, Blood Assurance, a blood bank in Chattanooga, stayed open late and asked residents to donate blood to help with the aftermath. According to posts on social media, crowds of people showed up to help the victims:

Authorities continue to put together the pieces that led the devastating accident. Police reportedly believe that speed played a very strong factor in the crash, according to CNN. Meanwhile, schools in the Hamilton County district will be open for class on Tuesday and extra personnel will be available for children affected by the tragic situation.

In the midst of an active investigation into such a heartbreaking incident, the identities of the young victims may not be released for some time. But the dozens of children who did survive the crash are going to need all kinds of support, such as much-needed blood donations and plenty positive thoughts.