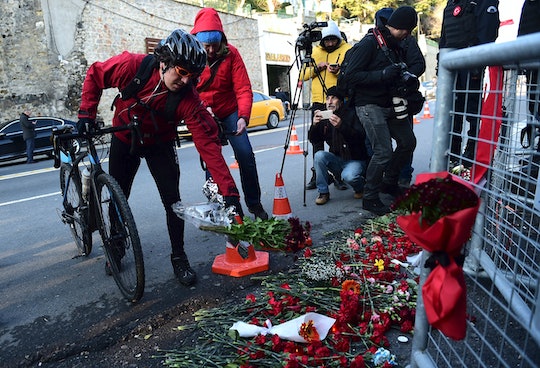 The Victims Of The Istanbul Nightclub Attack

The new year was met with tragedy in Istanbul, Turkey. As club goers were celebrating the beginning of the new year and saying goodbye to the old, gunfire broke out in one nightclub injuring dozens and claiming the lives of many. This senseless tragedy killed innocent people who were just having a fun night out. And as people begin to learn more details about this attack, they will begin to wonder who were the victims of the Istanbul nightclub attack? As more details begin to emerge, there is now a clearer picture as to whose lives were claimed.

According to The New York Times, ISIS claimed responsibility for the attack on the nightclub that left a reported 39 people dead. Despite ISIS claiming responsibility, the identity of the gunman and his whereabouts still remain unknown, according to USA Today, as authorities are still searching for the man responsible for these deaths. While information about the gunman might not be known, one thing that is becoming more certain are the details about the victims of the attack, giving a look into who was caught in the gunfire. It wasn't just residents of Turkey who died during the attack. According to The New York Times, the attack claimed the lives of 27 foreigners, 11 Turkish people, and one person with dual Turkish and Belgian citizenship. So far, 38 out of 39 of the victims have been identified. According to CNN, 24 men and 15 women died in the attack.

The New York Times breaks down the identities of the victims even further. As of Monday, seven victims came from Saudi Arabia, "Iraq and Lebanon each had three citizens among the dead; India, Jordan, Morocco, and Tunisia each had two; and Canada, Israel, Kuwait, Russia, and Syria each had one." CNN provides a clearer picture as to who those victims were. According to CNN, a Turkish security guard named Faith Cakmak, who had narrowly escaped a bombing in Istanbul a few weeks prior was one of the first victims of the attack.

The victims of this awful terror attack were just people looking for a fun night out after the start of the new year. This attack, which claimed the lives of so many different people, is truly saddening.