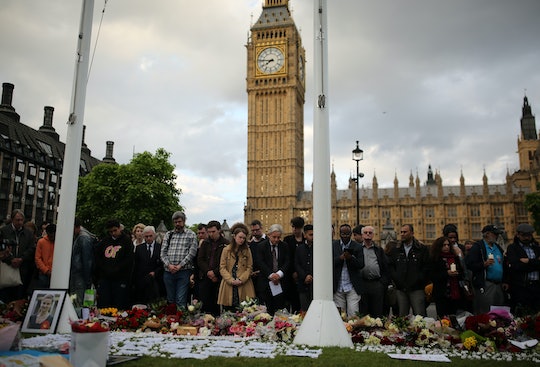 Who Were The Victims Of UK Parliament Attack?

On Wednesday afternoon, shots were fired outside the U.K. Parliament, leaving the people of London frantic and in fear. Among the many questions about the event, many were left wondering who were the victims of the U.K. Parliament attack? As reports continue to come in, it's clear many were affected by the incident.

According to Reuter's Twitter account, the U.K. Parliament attack began at around 2 p.m. local time. The news outlet reported that two people were shot outside U.K. Parliament and that the building was immediately put on lockdown. According to The Daily Mail, the shots occurred after an incident on the Westminster Bridge left about a many people injured or in critical condition. The publication reported that more than 12 people were hit by what witnesses describe as a 4x4. The alleged assailant, who was driving the vehicle, then made his way to the U.K. Parliament where he stabbed someone. Not long after, BBC reported that the assailant had been shot by police officers.

Many are wondering whether or not the U.K. Parliament attack is a terrorist act. Though no information has been released about the assailant yet, The Guardian reported that London police officers were treating the incident as a terrorist incident until information says otherwise.

As of now neither the names of the victims nor that of the assailant have been released. What has been confirmed by several outlets, however, is that the victim who was stabbed outside U.K. Parliament was a police officer. Additionally, Good Morning Britain reported via it's website that one woman was killed in the attack on the bridge. The victims were being treated outside Westminster Palace, as ITV News political correspondent Emily Morgan tweeted. She also shared that an ambulance left the scene with what many assume to be the assailant. It is unclear whether he was killed or injured from the shot.

The BBC reported that several members of parliament (MPs) were voting during the time of the attack. In speaking with the publication, Montgomeryshire MP Glyn Davies said he and others were startled by the news. "We're a bit shaken as the reality of the attack sets in, he said. "My thoughts go out to anyone who's been injured." Several other MPs took to Twitter to share their accounts of the incident and confirm their safety. Caerphilly Labour MP Wayne David tweeted his thanks and thoughts to those who were concerned. "Thanks to everyone for their concern. My thoughts are with those who have been hurt," he wrote. "Parliament is in lock down. Most MPs safely in chamber."

Romper will continue to monitor the incident and report on any updates. Our thoughts are with those in London.