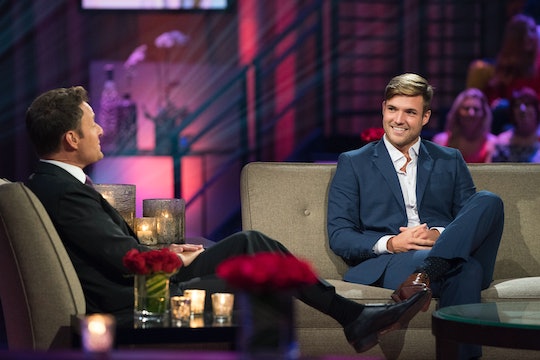 First off, Lincoln Adim will not be at the reunion. For fans who have kept up with off-screen news, the reason for this is pretty obvious. In 2016, Lincoln was charged with assault and battery and was convicted in May of this year — a week before this series began. In a statement to ET, Warner Bros. (who produces the show, while ABC airs it), said about the situation, "No one on The Bachelorette production had any knowledge about the incident or charges when Lincoln Adim was cast, and he himself denied ever having engaged in or having been charged with any sexual misconduct."

Well, Warner Bros., ABC, and everyone involved certainly knows now and Lincoln will no longer be a part of the franchise. In an interview with ET, Chris Harrison explained that Lincoln wasn't invited to Men Tell All. "I did not want him here nor did he deserve to earn the right to be here. He forfeited that right obviously with what he did, and lying to us and deceiving everybody," Chris Harrison said. "So no, I'm very glad that he was not here and he was not extended an invitation."

According to The Hollywood Reporter, all of the "notable" contestants that have been eliminated thus far will be in attendance for Men Tell All. That means that Blake and Garrett will not be — as they're still in the running for Becca's heart. Also, those who were eliminated early and deemed "insignificant" will not be there.

Grocer Joe stans, however, will be pleased to know that the handsome Chicago native may have been eliminated night one, but he will be on Men Tell All. (He was featured on Extra TV eating a slice of cold pizza — a man after my own heart). But even if he doesn't get a lot of attention on Men Tell All, fans will be relieved to know that Grocer Joe will get a second chance at love on Paradise.

So what drama from the season will the special touch upon? Here are my guesses based on the promo and as a long-time Bachelorette viewer. Villain Chris R. will speak about his behavior on the show; Jordan will hopefully explain what he means by "professionality;" and Jason will talk to Becca about the fantasy suite that never was. Other than that, my guess is as good as yours.

One thing's for sure, though, I'm excited to see Becca interact with the men that she's eliminated so far. I think she's been a great Bachelorette in that she's no-nonsense and follows her heart. When talking to The Hollywood Reporter post-Men Tell All taping she said, "I’ve asked this since the journey began, but I want people to stay open to who these guys are. I was lucky enough to go on this journey with 28 guys and to really get to know them for who they are — away from social media, away from all the distractions — and so that was something special for me that I got to experience and I just hope that the viewers can be that same way." Well I will certainly be keeping an open mind through the Men Tell All special. As for after the finale, however, I can't promise anything.