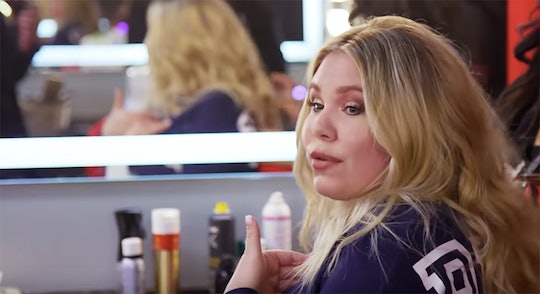 Some 'Teen Mom 2' Stars Threatened To Bail On The Reunion

JeTeen Mom 2 is close to wrapping up Season 9, which means the reunion is right around the corner. And ahead of the taping, there has been some behind-the-scenes drama on Twitter. Given the controversy, there are questions about who will attend the Teen Mom 2 reunion.

In case you missed the tweets this past weekend, Kailyn and Briana both gave conflicting statements about attending the upcoming TM2. The drama all started when Kailyn tweeted on Saturday, "A little birdie told me briana isn’t going to the reunion. Which is funny cause I’m not either. Let’s see how this goes." Um, say what now?

Briana responded to Kailyn's tweet with a shrug emoji, which prompted further speculation about what had transpired.

Kailyn, who is a big fan of cryptic tweeting, later added: "When people aren’t being treated fairly and things are not the same for all cast members across the board, things become hostile."

Briana — who happened to date Kailyn's ex-husband, Javi — retweeted the message, adding another layer of mystery.

Apparently, much of this controversy boils down to Jenelle and her husband, David. Kailyn and the other cast members reportedly don't want to be around David after witnessing his knife fight with a balloon at the last reunion, and they won't him anywhere near set or in New York City in general, where the reunions are typically filmed.

Then there's the issue of Kailyn versus Briana. The co-stars got into a physical fight at the Season 8B reunion, and Kailyn reportedly doesn't want to share a stage with Briana ever again.

To accommodate everyone's needs, producers supposed decided have the ladies film in different cities. “As of last week, the plan was for Kail to room in Jersey City, New Jersey; Jenelle to be in Philly and Briana to be in New York City, along with Chelsea and Leah,” a source told The Ashley's Reality Roundup. “The idea was that Jenelle would be driven from Philly by someone from the show and taken to set, so that David wouldn’t be able to attend at all ... "

Everything with that plan was all fine until they had to find a solution to the group segment.

“The producers told Kail that she would be Skyping into the group segment from her hotel in Jersey City, and Jenelle would be Skyping in from Philly and Briana from her hotel in NYC," the source told The Ashley's Reality Roundup. "Chelsea and Leah would be in-person on stage Kail was furious. She felt like the producers chose Bri over her to be there, even though Kail is an original cast member and Briana is not.”

Briana confirmed the Skype plan on Twitter, writing: "I don’t mind being on stage with everyone. I was willing to put everything aside. I was fine Skyping in until somebody caught a fit about having to Skype in too and wanted to change stuff but now everything is fine. changes have been made accordingly to fit every1s needs."

Given Kailyn's reported frustration, producers supposedly decided to have all of the cast members come to the reunion at separate days and times.

Now that everything has been worked out, Briana will attend the reunion. "Kidding guys, I have to go to the reunion cause I’m A PART OF THE CAST you know," she tweeted. "Just had to regulate some stuff but everything is all gravy see y’all in nyc next week."

Chelsea and Leah haven't weighed in on the matter, so I think it's fair to assume they'll be there. Jenelle has retweeted articles about the drama, but she hasn't spoken out either.

As for Kailyn? I think there's a good chance she'll be there too if things go as planned.

No matter what happens with the cast lineup, I think it's fair to assume the reunion will be dramatic. These ladies know how to bring it.