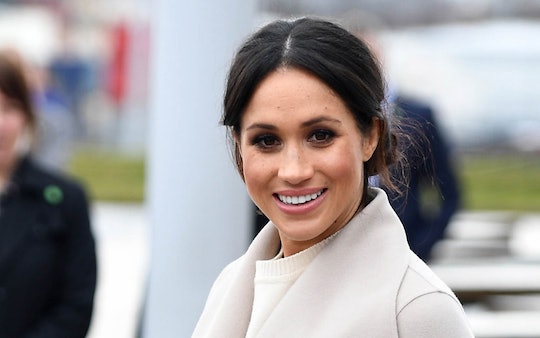 Who Will Be Meghan Markle's Maid Of Honor? Here Are The Likely Contenders

The royal wedding is going down in just a few weeks, but there are still quite a few details left up in the air. On Thursday, Kensington Palace announced that Prince Harry had finally asked his brother, Prince William, the Duke of Cambridge, to be his best man, but the public still has no word on who Meghan Markle's maid of honor will be. By contrast, the Duchess of Cambridge (then known as Kate Middleton) announced that her sister, Pippa, would serve as her maid of honor two and a half months ahead of her April 2011 wedding, as part of a joint statement that also named Harry best man.

Given that the brothers are so close, and the fact that Harry was in William's wedding, the announcement that he'd been asked certainly came as no surprise. Back in January, U.K. radio host Roman Kemp asked William if he'd secured the spot yet, according to People, and the Duke joked, "He hasn't asked me yet, just to clear that up. It could be a sensitive subject." He then went on to call Harry his "best mate," though, and cited losing their mother at a young age as one of the reasons for their tight bond. "You're like-minded," he said. "You go through similar things — it's a bond, and it's something you know you've tackled together and come out better for it."

The question is, does Markle have that kind of a "mate"? Here's a look at a few of the contenders who's names have been floated as a possible MOH:

A source close to Markle told Vanity Fair that Canadian stylist Mulroney is Markle's best friend and "secret wedding planner," talking details with the former Suits star daily and "helping Meghan to make all the key decisions." She seems like a very likely candidate for the job.

But there's another reported "best friend" in the running: Lindsay Roth, a normal, non-famous person who Markle met in college. "We're the kind of friends who can be 3,000 miles away and still be talking about or thinking the same thing," Roth told People last year. And Markle was Roth's MOH, so that would make a lot of sense, as well.

Fashion designer Nonoo was once married to a friend of Harry's, People reported, and rumor has it she might be the one who set Markle up with her future husband for a blind date in July 2016.

Who It Definitely Won't Be

The other names that have been tossed around are totally out of the question, like Markle's half-sister, Samantha, who's written a tell-all book about her, or her former best friend, Ninaki Priddy, who has painted Markle as a "calculating manipulator" who was "obsessed" with Harry's late mother, according to E! Online. It's also not going to be Kate, who wasn't even MOH in her own sister's wedding last year (although she did basically act as one, sans title). Some have speculated that former Made In Chelsea star Millie Mackintosh might be a possibility, but literally every recent headline featuring her name contains words like "bare," "bikini," "boobs," or "bum." Considering the fact that Markle had to give up social media to date Harry, and Kate's reportedly not allowed to show her thighs, according to Reader's Digest, it seems unlikely that the Queen would welcome Mackintosh.

And for everyone hoping tennis champ Serena Williams might show up, I'm sorry to disappoint, but on Thursday, she told Good Morning America that she might not be able to attend at all, as the wedding coincides with a Grand Slam tournament, according to Us Weekly. Finally, there's actor Priyanka Chopra, who told People on Wednesday that she's "super excited about [Markle] and her big day," but that she's "not a bridesmaid." But wait a minute. Royal bridesmaids are always little girls. Chopra didn't say she's not the maid of honor! Could be...