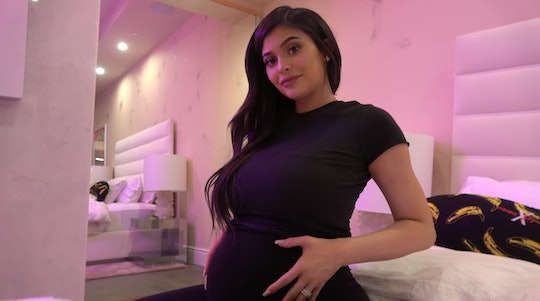 Kylie Jenner's baby girl low-key graced the world with her presence on Feb. 1. In fact, no one was aware the reality star had given birth until she officially announced her happy news via social media on Feb. 4 — three whole days after the big event. The fact that Jenner and her family were able to keep quiet amid the pregnancy rumors that had been rampant since September was nothing short of miraculous. (You know, considering the fact that the realty-star family has been sharing their lives with the world for more than a decade.) Now that Jenner has confirmed she's a mother, fans are dying for more details. However, some of the specifics about the reality star's first child are still a bit murky. Many of the family's followers have likely wondered: Who will be Stormi Webster's godmother? Kylie Jenner's daughter certainly has plenty of capable contenders.

For starters, there's no law stating Jenner is required to name godparents for her baby girl. Many people choose godparents in a religious sense prior to having their children baptized. This second set of "parents" is (informally) responsible for making sure the child's religious education is carried out, according to Cristeningessentials.com. Oftentimes, godparents are also legally named the intended guardians of the child in the event that both parents die. Either way, being named a godparent is a pretty big gesture. In case you're wondering how Kylie's older siblings have handled the process, Kim Kardashian previously revealed the godmothers for her first two children, according to Cosmopolitan: Khloé Kardashian is North's godmother and Kourtney Kardashian is Saint's godmother. (It seems the mom of three has yet to name a godmother for baby Chicago.) So I'd say there's a pretty good chance that Kylie may do the whole godparent thing, too.

But who will the lucky godmother be? According to HollywoodLife.com, Jenner is apparently "torn" between two of her sisters as being godmothers to baby Stormi: Kim Kardashian and Khloé Kardashian. And to me, this makes perfect sense. The Kar-Jenners seem like an incredibly tight-knit family. Still, as with most families, some siblings happen to be closer than others. Through the years, fans have watched Kim and Khloé help guide Kylie as she navigated life in the spotlight and in the business world.

In my opinion, Kim could definitely be an amazing godmother. Kim in particular supported Kylie via sisterly advice when she dove into the world of plastic surgery, Us Weekly reported. "I think if something makes you insecure and you've been feeling that way forever, who doesn't want to look amazing?" Kim told her little sis, Kylie on an episode of Keeping Up with the Kardashians. "You only have one life, and what I've realized from what all of us have gone through is do what makes you happy, to an extent .... Just make sure you keep everything subtle and don't go overboard. And I'm always there if you want my opinion." And according to the Daily Mail, Kim was the one Kylie turned to when she first found out she was pregnant.

As for Khloé? From an outsider's perspective, it seems like walking through pregnancy together could have made Kylie and Khloé's relationship even stronger. I mean, bumpin' photo is just too cute!

Not to mention, the pair has collaborated in their makeup business ventures via the In Love With The Koko line and the Koko Kollection of Kylie Cosmetics.

Although both Kim and Khloé would be excellent choices for Stormi's godmother, I wouldn't be surprised if Jenner chose her BFF Jordyn Woods — who always seems to be by her side. If you remember, Woods played a pretty big role in Jenner's 11-minute video chronicling her pregnancy. She was literally one of the first people to find out Jenner was pregnant, too.

Her BFF has also frequented the Lip Kit mogul's social media channels. Like this time Woods did Jenner's makeup while blindfolded. LOL. If Jenner trusts Woods not to poke out her eye while blindfolded, perhaps she really could be godmother material?

As with the rest of the details surrounding baby Stormi's gestation, birth date, name, etc., I'm guessing we'll only find out who her godmother is when mama Kylie Jenner is good and ready to let the world know. With so many amazing women in her life, really, she can't go wrong.