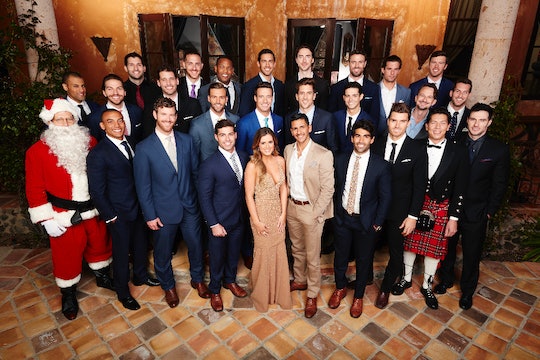 With JoJo Fletcher's season of The Bachelorette coming to a close as we head into the last few episodes of the season, viewers are turning their attention toward the next big question in Bachelor Nation: who will be the 2017 Bachelor? Yes, it's that time to start suspecting. It is never too early to start wondering who will take the role in January, and this season is no different. There are many different options to look at, some better than others depending on your favorites this season. But, assuming that the next Bachelor star will be one of the men from JoJo's season, we can start looking at who would make a great candidate.

Typically, the name of the next Bachelor is announced sometime in August, to coincide with the airing of the spin-off Bachelor in Paradise and to set viewers up for a solid five months of getting hyped about the new season. While we have about a month (or more) until the star of The Bachelor Season 21 is revealed, I've ranked the top five contenders in order from least to most likely, basing my choices on common Bachelor Nation knowledge, fan reaction to JoJo's hunky batch of contestants, and who I'm betting JoJo's final choice will be.

John Krasinski look-alike Derek set Twitter ablaze when he became the first Bachelorette Season 12 contestant to openly weep upon being eliminated. Fans had a big reaction to his outpouring of emotion, and I, for one, loved how genuine he was throughout the season. JoJo eliminated him purely because she wasn't feeling the chemistry with Derek as much as she was with Chase, the other half of her two-on-one date pair, not because of an apparent issue with Derek himself.

The only potential disqualification for Derek might be that he was eliminated too early in the season – historically, Bachelors or Bachelorettes, when chosen from a prior season, were eliminated during Week 6 at the earliest and he was sent packing during Week 5. Additionally, in a recent interview with Bustle, Derek was hesitant to live "under a microscope" by participating in a reality dating show again and was doubtful that ABC would even approach him to be the next Bachelor. But I have faith in Jim Halpert's doppelgänger, and so should ABC.

The only reason Jordan is so low on my list of potential Bachelor contenders is because I'm almost positive that JoJo will pick him at the end of this season. If JoJo picks Jordan, I'd be seriously shocked if they were to call it quits only a few months into their relationship – especially if a proposal accompanies the final rose ceremony.

But if it does come to that, Jordan wouldn't be alone as the only winner of a season to later go on to become the star of the next. Jen Schefft won the final rose during Andrew Firestone's season of The Bachelor only to go on to become the star of The Bachelorette Season 3, and Emily Maynard won Brad Womack's second season only to later become the eighth Bachelorette. So, while rare, it could certainly happen. Jordan is incredibly good-looking, charismatic, and something of a ladies' man, if rumors are to be believed. Those are all key ingredients in being a successful Bachelor.

In my personal Bachelorette bracket, Robby takes home fourth place, which is enough time for him to go home, get over JoJo, and be a viable Bachelor candidate. Because, let's face it – no one wants to vie for a dude still hung up on a woman that he just spent weeks falling in love with on national television. A former competitive swimmer, Robby's got the hot bod and the dashing smile that will all but surely hold a swooning group of women's interest.

The only hang-up for Robby is whether those pesky ex-girlfriend rumors don't get cleared up during JoJo's season. Bachelor Nation loves drama, but whispers that you dumped a long-term girlfriend to appear on The Bachelorette is a bit too much drama and would also make him an unappealing match. Personally, I wouldn't vie for a dude with baggage like that, but that's just me.

Chase is unlikely to make it to the final two, which means that, as with my reasoning for Robby, he'll have plenty of time to get over JoJo and become a viable Bachelor candidate. Chase isn't a fan favorite like Jordan or Luke, but rather than counting as a point against him, that's probably a good thing. Knowing too much about a guy can make his season of the Bachelor kind of boring, too be honest. With Chase, because we don't know him all that well, I have a strong feeling that there's a lot left to unpack. Plenty for an entire season as the Bachelor, anyway.

Chase is good-looking, with a fun personality – that goofy yoga date with JoJo back in Week 3 was hilarious. Chase clearly has sparks with JoJo, but not enough to be a final contender in the race for her heart.

Luke is easily the most unproblematic fave of the season. He's been nothing but upfront with JoJo from the beginning. Plus, he's incredibly handsome, gentlemanly, and a war veteran. If he were to be chosen as the new Bachelor, he'd be the first vet in the show's history, which is a huge deal. On top of that, he sings and plays guitar – swoon. He also seems like one of the most genuine guys on the show. There's never been even a hint that he's there for anything other than winning JoJo's heart. He hasn't even advertised that he's a burgeoning singer-songwriter, which essentially seals the fact that he isn't in it for the fame.

JoJo clearly has sparks with Luke (Exhibit A: all those fiery hot make-out sessions), but I don't get the sense that she's as invested in him as either Jordan or Robby. Given his all-around good-guy appeal and the likelihood that he'll make top 3 at best, Luke is basically a shoo-in for the gig.